Apple’s Catching up to McDonalds – Over 3 Billion Apps... 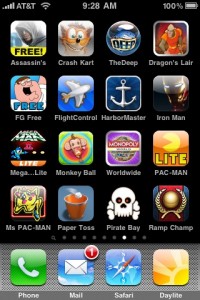 It’s been 18 months since the App store was first introduced, and today Apple announced that they’ve passed the 3 billion apps downloaded number, Now sure, not all of those apps cost money, and not every one costs $9.99 either, but no matter which way you slice it, that’s a whole lot of money in Apple’s pockets. It was September 28th when Apple announced that they hit the 2 billion number, just over 3 months ago. How long will it take to hit 4 billion? I’m gonna put the over/under at April 4th. Place your bets now.

What’s this mean for Apple fanboys? Expect more apps to be released in the coming years, and even more versatility and functionality for the iPhone to come down the road. And expect those apps to come from bigger names as well, because at this point, big companies have no reason to ignore the iPhone as a viable platform anymore.

Big things going on for Apple. Now let’s see how this gets parlayed come Jan 27th.