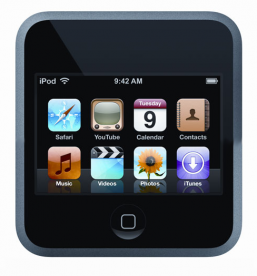 We’re just a few days away from the next iPod event, and that means there’s lots of speculation coming down the pike. I’ve been monitoring many of these rumors for a while now, but like most rumors, they’re all full of crap. One of them though seems to be getting more and more persistant, and it’s coming from many different sources. It comes down to a combination of different bits of evidence, including an image of a square touchscreen, and pictures of some case prototypes. Ultimately, it seems like this rumor could actually happen.

The basic premise would look like something above, albeit probably without the button: A small screen capable of viewing movies and album covers, that would also integrate a touchscreen navigation system. I’d imagine something like a “swipe to advance tracks” type of thing. Would it work? Yeah, I think it’s definitely possible, and it would be pretty cool as well. The lack of any kind of track indicator on the current iPod Shuffle is a pretty big detriment, but it’s one that people have dealt with for years. The real problem is the lack of buttons on anything other than the headphones, which means that you can’t use every set of headphones with the player. I’m not sure how that translates financially for Apple, but I know that I haven’t bought one because of it. Now if this square touchscreen happened, then I think that becomes a high-selling model.

Just a few more days now and as they say, all will be revealed.