The Smartwatch Apple Should Have Thought Up

by Robin Parrish 11 years ago10 months ago
4

“Pebble” may be a dumb name, but it’s a killer idea: a smartwatch that connects to your iPhone via Bluetooth, uses an e-ink display for long battery life, and even comes with a free SDK so devs can make their own apps for it.

Pebble, currently looking for backers on Kickstarter, sports a 1.26-inch, 144×168 pixel e-ink display, four buttons, vibration, and even an accelerometer. Since it uses a low-powered e-ink display, a single battery charge will last more than 7 days. And it interacts with your iPhone via Bluetooth 2.1. 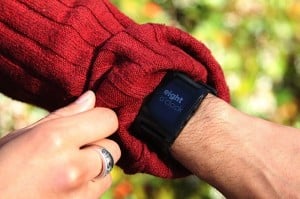 The idea is built on how iPhone users are constantly pulling out their phones throughout the day to check the time, play music, check email, and so on. The makers of Pebble — a startup called Allerta — came up with the clever idea of putting these functions into a wrist watch that interacts directly with your iPhone. Instead of pulling out the phone, you just look down at your wrist. Allerta expects Pebble to be of greatest use to outdoor users on the go, like runners, cyclists, and golfers, because they can use things like the iPhone’s built-in GPS to track speed, distance, and more, right on their watch.

The smartest thing about the device is its e-ink screen; this is a true masterstroke on Allerta’s part, because it allows for near infinite customization, and eliminates the sunlight glare that iOS users frequently experience outdoors. And since that e-ink screen is nice and roomy, you can download watchfaces as well as apps built just for Pebble that you can download in-app on your iPhone. Pebble will vibrate for notifications, and to dismiss, you just shake your wrist.

Pebble will be available in black, white, red, and one last color that users get to vote on. And don’t let the uncertainty of Kickstarter put you off; Allerta was looking for $100,000 in pledges, and in just over a single day has already received more than one million dollars in pledges. That’s probably due to the discounted price that Allerta’s offering Kickstarter pledges. Pebble is expected to retail for $149, but you can score one by backing it on Kickstarter for as little as $99.

Oh, and if for some strange reason you’re an Android user (seriously, I don’t understand you), Pebble works with the inferior, highly fragmented smartphone OS as well.