by Kevin Whipps 12 years ago2 months ago
3 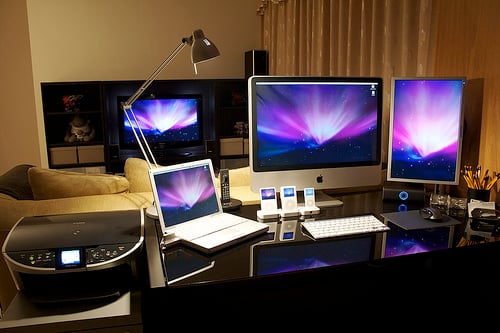 About a year ago, I moved my office from one room in the house to the other so that I could accomodate my as then yet unborn son. Between myself and my wife, we have three computers: My MacBook pro, a community iMac that’s mostly used as an iTunes server, and her Dell laptop. we bounced around a lot of ideas, including a setup similar to the one above with both the iMac and MBP sitting right next to each other. When I proposed the concept, my wife said to me, “But what’s the point of having two computers next to each other? What if I want to use one of them?”

Truth be told, I’m not really quite sure what the advantage would be. In my scenario, I could see using one computer for FTPing up large documents while the other is doing graphics work, but it does seem like kind of a waste. Which is why I come to you, our loyal readers with a question: What’s the point? Would this type of setup work for you? Let me know in the comments.