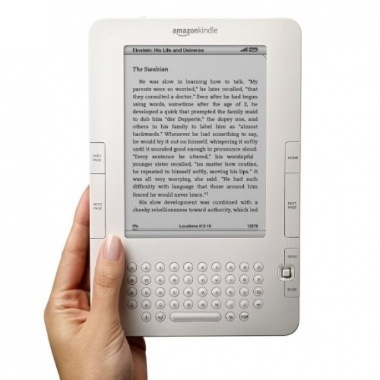 The hype behind the Kindle 2 has been astounding in recent weeks, and there have been more than a few comparisons with the iPhone. So, it seemed logical to take a look at the Kindle and see what the fuss is about. Is it even comparable to the iPhone? Will Apple be releasing something to “answer” to it in the near future? Let’s take a look…

The Kindle is an interesting device. I don’t think I really understood what e-ink was or how it actually worked until now. All this stuff about Apple creating an “answer” to the Kindle becomes even more silly when you look at how this e-ink works, and imagine an iPhone-styled screen on the device in place of the one it has.

The Kindle screen is certainly bigger than the iPhone screen – but not big enough to justify an entirely new device. Once you subtract the space on the screen that a book doesn’t use (the areas where a the UI gets in the way, keeping track of battery-life and page count) you’re left with an area that is the exact same width as the iPhone held in landscape mode, but with about 100 pixels more above and below an iPhone sized-screen. The e-ink does, of course, look as sharp as paper, but that’s a kind of deceptive sounding thing when you hear it. You think “my iPhone screen looks fine to me” – and you’d be right, your iPhone screen does look fine…but so did your CRT monitor back in the 90s. The sharpness of the e-ink, particularly on text, is heads and shoulders above what you see on any mobile device, or your desktop. Images, on the other hand, have a softness to them that just isn’t quite as sharp as they would be on a traditional screen. They’re not bad – they’re just not quite as crisp (at least, I haven’t found settings yet to make them as crisp yet).

But the thing that I think is the funniest about comparisons to devices like the iPhone – or even Internet tables and things like that – is that the Amazon Kindle isn’t trying to be or emulate any of that stuff. This thing is designed to read books on. It’s a reader, and nothing more. Sure, there is a “Basic Web” browser, and I was able to visit a few websites on it (and was impressed with how it translated images) but all Amazon wants you to do with this thing is read books…and they make that very easy to do.

The ebook store is easy to access, and I spent a good portion of the afternoon trying to find a place where I couldn’t get a signal…and I was unable to. It does seem to work just about anywhere (although speed will certainly very). The screen can be a bit laggy to refresh when compared to a traditional screen, not so much that it becomes a pain…it just requires that you slow down a bit (and by a bit I mean a second or two, max)…which I actually think could be a good thing.

I really like the fact that you can get samples of all books ahead of time, and I love the form factor. It’s thin enough that I can carry it with me, and since I can literally have a book store anywhere in the world, I am much more likely to try new stuff. Having the first chapters available is going to sell me many more books than I normally buy. The prices are good too. $9.99 and under for most titles is a great value, and I can already tell that I will be reading more with this thing than I have been before.

One final note – I think it’s very interesting that the devices screen never turns off. Instead it creates an image of famous authors each time it goes to sleep. It’s very strange to have a device that doesn’t actually go to a blank screen when you’re not using it.

The price on the Kindle is going to keep many people away from the device – which is understandable, but kind of a shame. I really dig it. When they get these things down to the $199 mark, I think you’ll be seeing them everywhere.