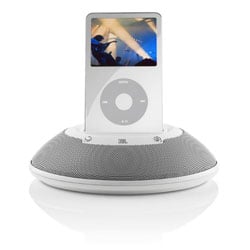 I don’t think you’ll find too many people that would argue against the fact that JBL is one of the most consistently impressive designers of speaker systems for the iPod on the market. So, when I got a chance to take a look at the latest edition to their family of On Stage products, I lept at the opportunity.

The On Stage Micro is the latest addition to the JBL On Stage line of speaker systems for iPods. The Micro is a very compact devic, not too much bigger than a standard dock. It is also the first of the On Stage offerings to run on batteries (or the included power supply), making it one of the most portable iPod speaker systems on the market. Keeping the device at the compact, highly portable size, does come at a cost though, as the sound quality – while very good – is not great.

Now, don’t get me wrong, there is a lot of sound coming out of this little device, and it sounds excellent…up to a point. You’re not going to be blowing the roof off of your house with this thing, but I have found that it works perfectly as a speaker system for your desk, or even in the kitchen. You can crank the volume up pretty loud before you start to notice any serious audio quality loss, but as soon as you pass the threshold, it become immediately obvious that you’re pushing the speakers to their limit.

The remote is nice and sturdy, with a variety of navigation buttons on it. As a personal complaint, I don’t care very much for the stylized icons on the remote, mainly because they confused my 3 year old, who had just learned how to operate the AppleTV. She wanted to give this a shot too, but since the icons on the remote aren’t standard play/pause and so forth, she was confused, and unable to operate the Micro without help. Now, that’s certainly not a big deal, but something that I wanted to point out as a dislike.

Navigating through your song library on the iPod is easy enough, but – of course – since the screen is very small, you can’t really flip through songs from the other side of the room so, while the feature is implemented well, it’s not terribly useful in most cases.

From a design standpoint, the JBL Micro is a good looking little device. You have two color options, white and black, and both look pretty slick – again adding to the value of the device on a desk or in the kitchen.

In the sub $100 speaker category, there aren’t a lot of devices worth writing home about, but the JBL On Stage Micro stands out for a variety of reasons. It’s good looking, it’s extremely portable, it also serves as a dock and you can even sync your iPod to your computer with it via USB, and the sound – while low end – is pretty good.