If Apple did make an iTablet – who would use... 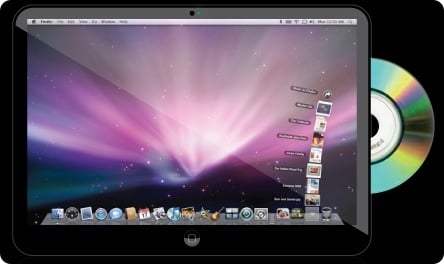 It’s been a while since we’ve had any ridiculous Apple rumors, but Loop Rumors fixed that for us last Thursday with their post about a top secret Apple project called “iTablet”.

You can see an “artists rendering” of the device above, but really there’s not much to “render” with this particular rumored device. It’s described in their article as a “Mac Communicator” that will feature Multi-touch 2.0.

There are a myriad of reasons why this device is never going to happen – despite what any “insider sources” may say…but the primary question I have to keep keep asking is, who’s going to use this thing?

There are no specifics on the dimensions of it, but we can assume that its significantly larger than an iPhone. I would assume, if they’re going to keep costs down in any way, shape or form, that it would have to be a smaller screen than a Macbook. So let’s assume it’s in that ballpark. What’s it going to be good for? Surfing the web? Watching movies on the go?

We already have that device in the iPhone and iPod Touch. Why on earth would we need it in a slightly larger, much harder to carry around form?

Then there’s the talk in the article of a “mini-dvd” drive. Let me get this straight, Apple, the company that almost completely ignored iDVD in the latest iLife update. The same company run by Steve Jobs, who dismissed DVDs all together by talking about “some customers who still use DVDs” during his iLife 08 presentation – THAT company is going to create a device that essentially has a proprietary disk drive on it?

Are you kidding me?

I can’t think of one reason why I would buy this device. The concept of an Internet tablet is long gone. It makes no sense. You can buy a notebook and have a full blown computer in your lap that’s light weight and easily portable. If you want even more portability Apple has two products you may have seen an advertisement or two about called iPhone and iPod Touch. They deliver a fantastic mobile web experience that is one Flash download away from being perfect.

There is no need for a device like this. If Apple did make a device like this I think its safe to assume that it would go down as one of the stupidest moves in the company’s history (not THE stupidest mind you – but in the Top 10). It’s a device that doesn’t solve a problem. There is no market for it, and I can’t imagine there being even a 10% chance that this is real.

Now, having said that – if this was a device that was a 13 or 15 inch screen, that could dock onto a stand and be used like a desktop, but also had multi-touch – I’d be right there with you. That, to me, is a great evolution of the iMac line, and a home computer that is the most mobile desktop you’ll ever have. Sadly, that’s not what this rumor is talking about. What this rumor is talking about is a device that just plain doesn’t make sense.