by Jayvee Fernandez 13 years ago8 months ago
1 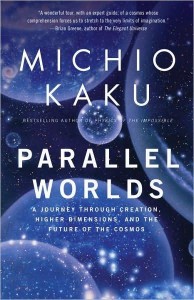 The long title is Parallel Worlds: A Journey Through Creation, Higher Dimensions, and the Future of the Cosmos by Michio Kaku. After listening to A Short History of Nearly Everything by Bill Bryson, any student of the universe will want to graduate to something a little more complex, and Michio Kaku, futurist, author and theoretical physicist is here to explain and defend String Theory.

It was only in the past decade that man had discovered how the periodic table of elements only make up less than 1% of the total elements of the universe — as opposed to what was taught to us in elementary school. If you have been exposed to the romance of dark matter, dark energy, worm holes and the possibility of time travel, this book gives the scientific explanation, much in a way Captain Jean-Luc Picard would have wanted it.

The book talks about the radical “new” theories of the past decade explaining the high probability of a multiverse, and the possibility, in the future to travel to another universe before it consumes itself. It starts with the Big Bang and the other theories that scientists have put together. It talks about what happened before the Big Bang. It talks about how universes are giving birth, like bubbles separating, to other universes and how man can eventually travel across space-time. If you’ve read fiction such as Flash Forward, you will have a great appreciation for this book.

Check it out now.