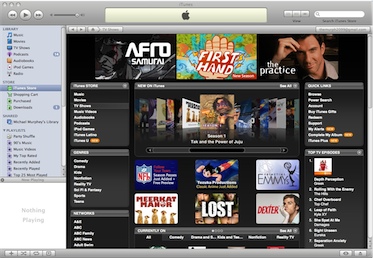 Variety is reporting this morning that Apple wants to take the price of TV Shows in iTunes down to .99 cents and episode. They even claim that is the reason for NBC leaving iTunes. I think that’s a completely false for a variety of reasons — BUT — I think this brings up a good point that needs to be discussed.

1) Not all Shows are the same length – An episode of Aqua Teen Hunger Force about 13 minutes. An episode of The Office is about 22 minutes, and an episode of Lost is about 45 minutes. Why are they all $1.99? I don’t buy Aqua Teen in iTunes because it feels like a rip-off to pay the same price for a 13 minutes video as I would a 45 minute video.

2) Old Shows should be cheaper – Studios could be charging less for older shows. New shows have a high production cost, and I can understand them needing a larger income from them, but older shows made their money back long ago, and studios can and would charge less for some of them. Just like when a DVD season of a TV show drops in price after a while, so too, and should, shows on iTunes.

3) Happier Studios means more content – While I DO NOT think the Studios should be in control here, giving them a little flexibility would be a good thing. It would reduce the tension between Apple and them, and would give them a few different options on how to market their content to us.