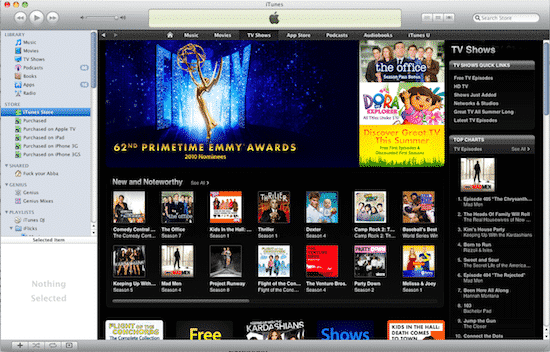 What’s the big rumor today? Well the headline pretty much says it all, but let’s go to Bloomberg for the big report.

Apple Inc. is in advanced talks withÂ News Corp. to let iTunes users rent TV shows for 99 cents and is in discussions with other media companies about similar deals, said three people familiar with the plan.

Viewers would be able to rent programs from News Corp.â€™s Fox for 48 hours, said the people, who declined to be identified because the discussions arenâ€™t public.Â CBS Corp. and Walt Disney Co. — where Apple Chief Executive OfficerÂ Steve Jobs is a board member and theÂ largest shareholder — also are in talks about joining the effort, the people say.

The content deals would give Apple users access to some of the most-watched shows on TV and increase the appeal of its devices, including the iPad, iPhone and iPod Touch. Adding programming also would build on iTunesâ€™ role as the biggest retailer of music and mobile applications, and help Apple ward off companies likeÂ Netflix Inc. and Amazon.com Inc., which offer their own online video services.

The networks are in trouble right now, and I’m pretty sure that they know it. Although many of them view iTunes to be the devil, the problem really lies in the masses running away from cable to services such as Hulu and YouTube. It’s getting easier and easier to find content free today. By getting a piece of the rental market from iTunes, at least they’re getting something for their hard work.Â I know I’d like to see it happen.