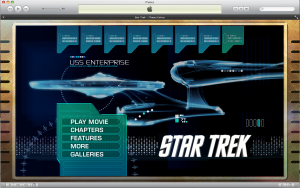 Over the holiday weekend, while suffering from a case of eating too much … everything, I decided to pick up Star Trek from iTunes to try out a few different features, then tell you about how they work. After all, not only is Star Trek an excellent movie, but it’s available in HD, with iTunes Extras. It’s the perfect test subject.

A quick note about my setup: I’ve got a 20-inch iMac which houses the bulk of my iTunes library, that streams through a Time Capsule to an AppleTV in the living room, which is running off the wireless. The Apple TV is connected to a 51-inch Samsung DLP TV, that’s only capable of 720p.

I downloaded the movie to my iMac, and then waited. It took about 2 hours to get the movie downloaded, which I wasn’t quite expecting, but once it was done, I decided to check it out. iTunes Extras end up having their own space in the listings, sitting right next to the regular Star Trek. There’s no mention of it being in HD in grid mode, just a little HD-SD symbol in list mode.

That little symbol started me thinking, so I did some digging and found out some things about HD movies in iTunes that I didn’t previously know. When you download the movie, it downloads both SD and HD formats. That way, it can still play on your iPod, which is a pretty smart idea. Also, HD movies are only available in 720p, not the latest 1080p version that most manufacturers consider HD. On my TV, the 720p looked amazing, and I had no complaints. But I also didn’t have another TV to test it on, and no way to do a side-by-side, either. I’d be interested to know if you could see the difference.

As far as the Extras go, they’re nothing special for Star Trek. A few movie posters, a little featurette and nothing much to speak of. It’s a neat concept, but I think until the DVD manufacturers start putting out cool features specifically for iTunes, that’s its nothing more than a fancy feature without much to it.

Overall, I’m still a fan of iTunes movies, and seeing them in HD works nicely for me. Sure, it’s not 1080, but I don’t have a 1080 TV in my living room anyways, so it doesn’t matter to me. I also secretly think that Apple will allow you to upgrade your HD movies to 1080 at a later date, the same way they’re offering DRM-free music now. Regardless, it’s a great way to get your movies when you want them, without having to get off the couch.