Apple still wants to charge for iTunes Plus upgrades 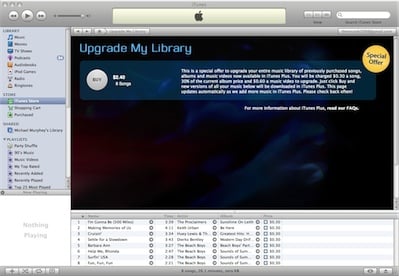 I clicked on the iTunes Plus box this morning to check out some of the new music that’s available from those Indy labels Apple reported they were adding. I didn’t get that far though, because I was immediately met with a large ad to “Upgrade My Library”. It turns out I have 8 tracks that are worth upgrading and they want to charge me $2.40 for it.

Now, as most of you may remember, Apple recently lowered the price of iTune Plus to $.99 cents – so exactly what the heck am I supposed to be paying for here? The privilege of having the DRM removed from the tracks? Or the slight audio upgrade? Neither should cost me .30 cents when the track is now the same price that I originally paid for it.

When iTunes Plus first started I was all for it, because it seemed like the only way the music studios were going to even try DRM-free sales was with a price increase, and I was willing to do that – but now that iTunes Plus is down to .99 cents and the Amazon MP3 store is even cheaper than that (sometimes), I’m kinda hacked off by this.

Frankly, I think Apple should either upgrade the tracks for free, or stop offering to upgrade them at all.