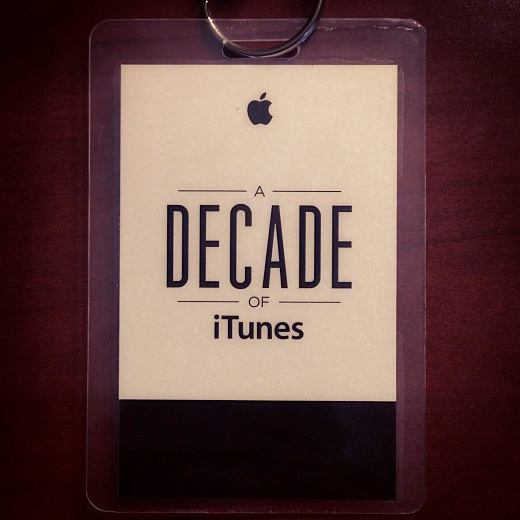 Apple HQ in Cupertino, California held an outdoor “A Decade of iTunes” party last night exclusively for employees, and even brought in a surprise musical act. So who was it? And what did the event look like? We’ve got a dozen pics from the scene.

If you happened to be driving past Apple’s headquarters in Cupertino, California last night with the windows of your car rolled down, you might have heard music filling the air. Everyone on staff knew about the party/concert/event, but many were surprised by the band Apple brought out to perform: OneRepublic.

According to OneRepublic’s Facebook page, their presence was planned as a surprise for Apple employees to help celebrate iTunes’ 10th anniversary at a special stage erected on the campus grounds. All indications suggest that a fun time was had by all, especially since the party appears to have included an open bar.

Check out the full gallery below.

A badge worn by a special guest. [Image source]

Setting up the stage. [Image source]

Another look at the stage. [Image source]

One guest’s drink and a view of the stage.[Image source]