Woz talks to the Telegraph about iPods, iPhones, and the... 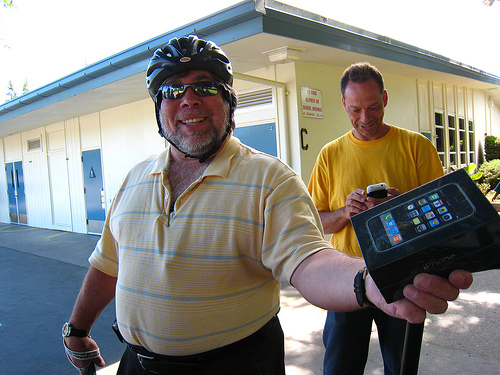 Steve Wozniak was recently interviewed by The Telegraph, and the big news many sites seem to have pulled out of it is that “Woz says the iPod is Dead!” or “Woz called the iPod a fad!”

Of course, if you actually read what he said, you’ll quickly see that neither of those things is true.

Here’s what he actually said:

“The iPod has sort of lived a long life at number one,” he says. “Things like, that if you look back to transistor radios and Walkmans, they kind of die out after a while.

“It’s kind of like everyone has got one or two or three. You get to a point when they are on display everywhere, they get real cheap and they are not selling as much.

Transistor radios and Walkmans weren’t a “fad” they were part of the evolution of mobile music. Eventually something new came along and replaced them…the same will happen for the iPod, and any other device that ever exists to listen to music on. Technology will (hopefully) always evolve.

As for it being “dead” – he didn’t say that. He said that things like this “die out after a while” – and that’s completely true. It doesn’t mean its dead right now. It also doesn’t mean that Apple isn’t going to be the company that replaces it. Right now we’re clearly seeing Apple transition from the iPod Classic style of unit to the iPod Touch style – and if Apple is successful in that transition, the life cycle of the product could begin anew.

He did speak negatively about Apple’s “closed” development system for the iPhone, however, saying that he’d like to “like to write some more powerful apps than what you’re allowed”, and that “Consumers aren’t getting all they want when companies are very proprietary and lock their products down”.

You can read the full interview right here.