More Bad News: Apple Locks out TV Out on iPod... 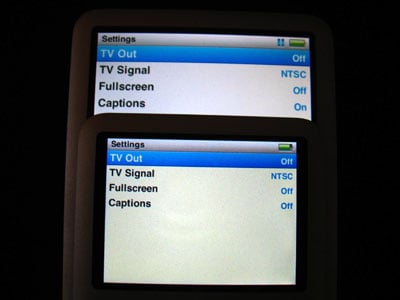 I don’t know what’s going on in Cupertino, but these guys are treading on dangerous ground. You can only kick your customers so many times before they just leave. After enraging almost every iPhone early adopter in the world, today iLounge has another very upsetting discovery.

Those new iPod Classics and iPod Nanos? Yeah…the video out on them doesn’t work with non-Apple produced accessories.

Without disclosing the change to customers, Apple has locked the TV Out feature of the iPod classic and video-capable iPod nano, preventing users from outputting iPod content to their TV sets as has been done in years past. Going to the Videos > Settings menu brings up a TV Out option that is now unresponsive when clicked, showing only the word â€œoff.â€ When locked, video content will display on the iPodâ€™s screen, but not on your TV or portable display accessory.

This means that most of the portable displays that people have purchased are completely worthless, and the only way you’re going to get your video out of those devices and onto a television is if you buy an Apple built dock and cables. The new Dock w/ Apple Remote runs $49, and the Composite or Component cables to hook that into a television run another $49 bucks.

That means you’re going to be out another $100 just to play the video from these devices on your television.

I’ve got to tell you, I find this much more upsetting than the iPhone price drop. This is just a bad idea, and I think what makes me the most angry is Apple making yet another really bad decision with the products that were announced on Sept. 5th.