“Tris” application to be removed from App Store over trademark...

by Michael 14 years ago8 months ago
5 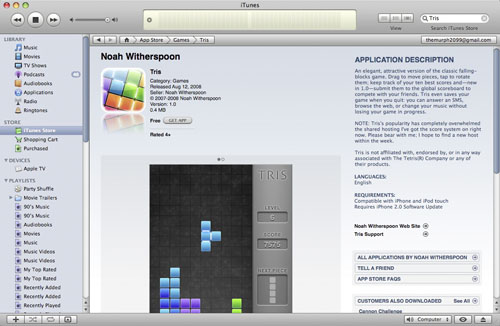 MacNN is reporting that Apple has informed the creator of the free iPhone game “Tris” (which is a Tetris clone) that if he did not volentarily remove the game from the iTunes App Store that Apple would “take action” against him if he did not resolve a “dispute” against him made by The Tetris Company.

The creator, who is a college student, feels that The Tetris Company, how own a trademark to the game Tetris, are taking action that “seems to me little more than petty bullying.” Even though he does admit that they have a right to protect their intellectual property.

Tris will be removed from the App Store on Wed.

MacNN compares the incident to the recent NetShare removal – but I disagree. This is a dispute over intellectual property, whereas the NetShare issue was an issue of violating contracts with phone companies. That’s not the same thing at all in my book.

If there is a legitimate trademark infringement claim it needs to be settled in a court of law. If the creator of “Tris” isn’t interested in doing that, then I’m not sure I see a problem with it being removed. I understand that argument that “he’s a college student, he can’t afford a lawyer” – and I get that, but that’s the system that we have. I would imagine from his point of view its just not worth the hassle – and I would have to agree with that if I was in his situation.

He’s obviously very talented, because Tris is a good Tetris Clone. Hopefully he’ll use those mad programming skills to make an original game of some kind in the near future.