Do you ever feel like you’re life is more complicated than it should be?

I felt that way yesterday.

Even if I hadn’t had issues with the AppleCare phone support, I still might have driven the Austin to get my Macbook Pro battery replaced. I don’t like waiting on stuff in the mail, and I need the mobility that the battery gives me, so I might have gone either way. After the day I had, though…I wish I’d just stayed home in bed.

I left for Austin around 8:30am. It was supposed to be just under a 2 hour drive to get to the Barton Creek Mall Apple Store. The drive up was pretty simple. I’d just been there a few weeks ago to get my iPhone replaced, and I remembered the way. Still, I used the iPhone for traffic updates along the way to make sure there wasn’t anything that was going to slow me down.

Now keep in mind, I know nothing about Austin. I’m from a much smaller town, and for all points and purposes I am essentially two steps above a hillbilly at best. A digital hillbilly, perhaps. So all these new fangled roads with their high bridges and multiple exits confuse the hell out of me.

So anyway, back to the story…

I arrived at the Barton Creek Mall Apple Store at 10:20, just in time for my Genius Bar appointment. 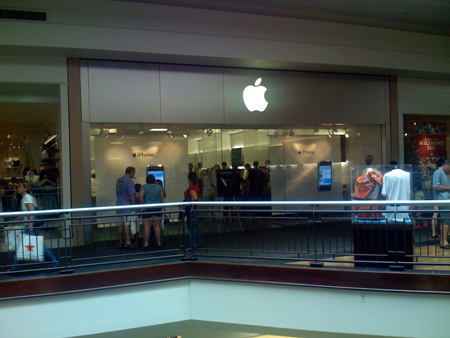 A Genius named Lee came up, helped me out, and in less than 5 minutes he had not only determined that it was, indeed, the battery that was the problem, but he even cleaned my Macbook Pro screen for me, which I thought was nice.

There was just one problem…

He was out of Macbook Pro batteries.

So I had two options. I could either have him order one and come BACK in a few days, or I could call AppleCare after he made a ticket for me and they could mail the battery to me.

Not happy with either of those options, I asked him if the other Apple Store in Austin might have some in stock. He called, and they did. He asked them to hold one for me, and then proceeded to give me directions on how to get there. I listened, but not being very familiar with Austin I wanted to find it on my Google Maps. The problem with that? Austin is expanding itself so fast, that a large portion of it isn’t on Google Maps right now.

The area where the other Apple Store is located is so new that none of it appears on Google Maps. So I had to go by the directions that the Genius gave me. The first thing he told me to do was turn on the MoPak Express Way.

Now that sounds simple enough…until you actually leave the Barton Creek Mall. Because there is nothing called the MoPak Express Way in sight…at least, none of the signs say that. So I was immediately lost. I called the other Apple Store (located in “The Domain”), and asked for directions from the street I was on. Again I was told to go on the MoPak Express Way, which was supposed to be just up the road. The person on the other end of the phone told me that The Domain was located behind a Home Depot, and I should see that once I got close enough.

So I go down the road for a few miles.

Finally, I decide that I am lost again. I happen to see a Home Depot at an exit, and decide to stop in that parking lot. I asked someone what the address was, then I looked up all the Home Depots in Austin on the iPhone. I found the one I was in the parking lot of, as well as the one that I was pretty sure was in front of “The Domain”. When the directions pop up, guess what they say? Take Loop-1/MoPak Express Way (so the damn MoPak Express Way was there the whole time, it was just hiding behind a mask as Loop-1) So…I decided to use those directions to get to the other Apple Store.

20 minutes later, I arrived at “The Domain”. Now, again, I’m from a much smaller place than Austin, and I’ve never seen anything like this place. It looked like an outdoor mall that was made up into a wannabe Rodeo Dr. There was valet parking, expensive restaurants and window displays of diamond necklaces that cost more than I make in a year. Every upscale brand you can think of, and several that I’d never heard of, all had shops in this place.

So, I found a non-valet parking spot (didn’t want to spend the $5 to have dude in a red jacket park my Focus), and started walking to the Apple store. I had no idea how big the place was going to be…and man, was it big…. 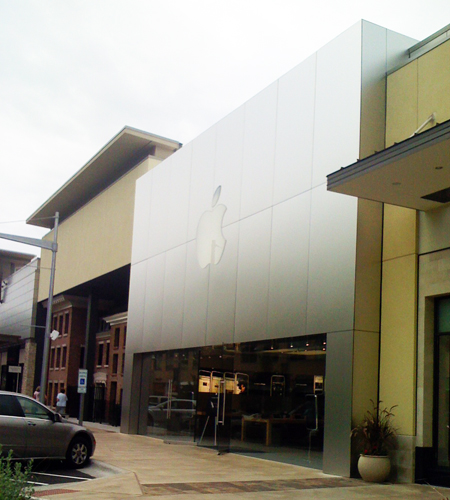 As big as it looked on the outside, when I walked inside I was convinced for a second that the damn thing was a TARDIS (google it if you don’t know what it is)….because this thing was bigger on the inside. 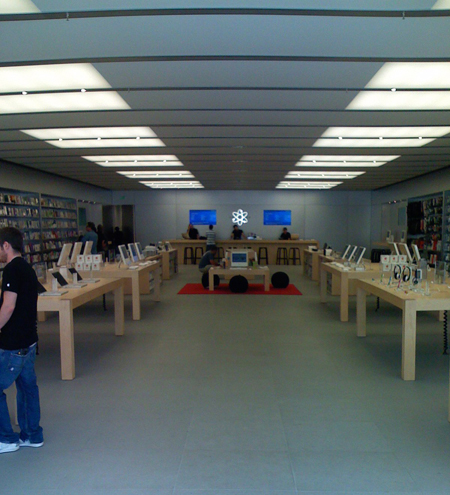 The first guy I spoke to was filled with that pompus charm that you hear about so much when people have bad experiences with Apple stores…luckily, he quickly passed me off to someone else who was much more helpful. I explained that I came from the Barton Creek store and what the problem was. He told me he was concerned there might be some logicboard issues, and then checked a few things.

After that he gave me a new battery, and told me to let it charge for a bit in the store to make sure it was going to hold a charge and keep the machine running. All in all, I was there for about 20 minutes. When I left, i had a new battery and everything was great.

Now remember, I don’t know my way around Austin and the roads I was on at this point aren’t on the maps. So I decided to get back on the Loop, going the opposite direction from which I had come. I figured I’d just look for an I-35 sign and exit then, and go home.

But there was no I-35 sign. Ever. I don’t know how that’s possible unless they just don’t have all the signs up yet (all of this was still under construction.

Also, I thought Loops “looped around” cities. This one, dead ended into a small two lane road. I had the option of going left or right. I decided to go left, and I started driving. There were no signs to tell me where I was or how far away any other towns were. This wasn’t looking like Austin anymore, so I was pretty sure I was somewhere else.

I drove for what felt like an hour just trying to find anyplace where I could stop for directions. Finally, stuck in the middle of nowhere, there was a BBQ place called “The Saltlick”. I stopped there, and asked how to get to I-35. They laughed at me (as I’m sure many of you are now), and then told me to turn around and go back to a junction that was just up the road.

I did that, and was on my way to the town of Buda, Texas. Stuck out in the middle of nowhere I saw several new housing developments being built, and then (very much to my surprise) a massive Hindu Temple. Compared to the Christian churches that we have in Texas every few feet, this thing was massive, and it literally looked like something out of a fantasy film. If I’d had more time, I would have had to stop and take a look around, but I was determined to find I-35.

Another 10 minutes or so go by, and I am in downtown Buda, Texas. Another 5 minutes or so of driving and I finally see I-35. I also discover that I am 17 miles on the opposite side of Austin that I need to be.

So I begin my trek home.

About an hour after getting back on I-35 I decided to stop at a McDonald’s to grab a burger. I needed to get out of the car, so I parked and went inside. When I had my order, I sat in my car and ate, while catching up on some emails on the iPhone.

Then I looked over at my driver’s side window.

It was splattered in ketchup. 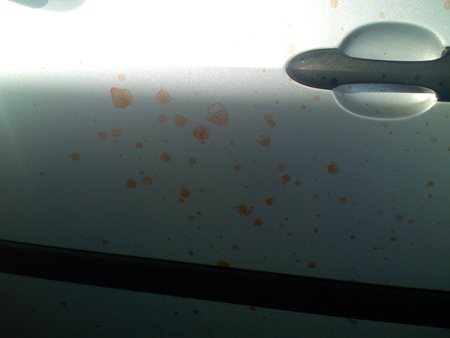 I don’t know if someone threw it, or if someone ran over a packet and it just shot that high in the air, but somehow, my day was capped off with my car getting covered with ketchup.

I went home. I washed my car. Then I had dinner with my family, and I was incredibly glad to be home.