iPhone vs. Android Smartphones: Which is Better?

There has been a huge debate regarding which smartphone is better in terms of functionality. Many users have wondered which mobile operating system is superior, iOS or Android. The two options have been in existence for over a decade now. They have accumulated advanced features that have enhanced their functions and quality.

Based on how companies use technology, the two operating systems have multiple similarities and differences, which gives each some edge over the other. As a result, users are interested in knowing which of them is better.

While this article will not tell you which is superior to the other, it will highlight their common features. This will help you determine which option is better based on what you’re looking for. 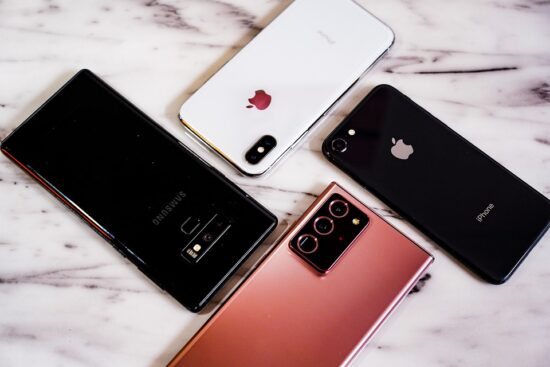 iPhones have sleeker designs every time there is a new release. Each new iPhone model is superior to the previous ones. For instance, Apple did away with the home button in order to provide an edge-to-edge display in the iPhones, starting with the X model. This improved the phone’s aesthetics and uses Touch ID and Face ID. The iPhone 13 series brought back fingerprint scanner features.

Some Android smartphones have a dual-edge display, while others have a bezel-free screen which gives them a seamless design and display.

Mobile phone displays are manufactured using the two most prominent technologies, namely OLED and IPS LCD. iPhone 13 has an OLED panel and over 1,000 nits brightness which is the highest among other smartphones, while the majority of Android devices use IPS.

Apple prefers OLED because of its power efficiency advantage over IPS LCD. It’s able to save energy because it can turn on without the use of an active backlight to light it up. A phone with OLED has better viewing angles and reflects less light compared to IPS, thus improving users’ viewing experience.

Such features make OLED displays more costly than IPS which also contributes to the reason why iPhone is sold at a high price. They also have a better display than their Android counterparts.

Users are ready to pay more just to have amazing photos. They want to document their life events, and so they’re looking for a phone with a great camera.

Apple products have one of the best cameras; for instance, iPhone 13 Pro Max has telephoto, wide and ultra-wide cameras. It has a night mode, ultra-wide lens correction, image formats captured such as JPEG and HEIF. Samsung and Google are some Android smartphones with the best camera features in the market.

Therefore, both brands have amazing camera features. However, the quality of cameras of most Android phones differs from iPhones.

A cool smartphone without a good battery can be a nightmare. Actually, most complaints about these phones touch on the charging system and poor battery. The good news is that smartphones from both operating systems have different battery life. In fact, the latest iPhones have a better battery life than they did some years back.

Still, some Android phones have a fantastic battery life while others have less than average. They show the overall battery and the usage of each app. The advantage of the Android smartphone is that it shows the percentage of battery life left, has wireless charging and fast charging features.

This storage capacity is similar to Android smartphones such as the Google Pixel lineup and Samsung Galaxy S22 ultra. For instance, the 128GB of storage can hold up to 3.368 apps. Each of these apps has an average size of 33MB. Further, these smartphones allow external storage of around 512GB in addition to the internal memory of 512GB which gives you 1TB of storage.

Apple is a highly luxuriant brand. In fact, its products are designed for the high-end markets, particularly the iPhone. The latest iPhone model is the iPhone 13. The 6.7″ iPhone 13 Pro Max is going for $1,099 and is considered the best smartphone that Apple has ever made and the best phone overall. Other models of iPhone 13 are iPhone Mini at $699, iPhone 13 at $799, and iPhone 13 Pro at $999. This makes iPhone pretty expensive

The Android brands also have high-end smartphones. They include Google Pixel at $599, Google Pixel 6 Pro at $899, Samsung Galaxy S21 Ultra at $1,199. These prices show that the Android family goes toe to toe with the latest Apple smartphone.

On the other hand, Android devices are diverse because the involved brands have low-cost phones and a wide variety to choose from. In other words, customers have a wider range of smartphones and price options.

Android phones are easily customizable than iOS, which is why these smartphones have many users. All iPhones series have the same great designs; however, they’re not customized according to the users’ taste.

Android brands, on the other hand, give their users a measure of customization. They can download launchers on their phones and root them to add customizing freedom, although this can disrupt the system.

Users want to buy a mobile device that is secure and where its personal information is private. Apple uses iOS, a more secure operating system, or a closed system. The reason behind its high security is that it doesn’t release its source code to any app developer. iPhone users can’t modify the code on their phones also. These two measures have made it difficult for iOS-powered devices to be hacked. However, iPhone owners should be careful when downloading applications from third-party app stores.

On the other hand, Android depends on open-source code. That means users can tinker with their smartphones’ operating systems and create a weakness in the security of their devices. Further, hackers can get access to any modification of the Android operating system even when manufacturers release a new device. As a result, hackers target Android because of that security weakness and the fact that this operating system is more popular across the globe. In view of that, your Android smartphone has a higher risk of viruses and malware that cybercriminals unleash.

Therefore smartphone users should secure their phones by downloading apps from trusted sources like Apple App Store or Google Play Store because they vet all the apps they sell on their platforms.

Android smartphones have a higher share in the cellphone market compared to iOS. This trend is expected to continue in 2022 and beyond. Price and specifications are the contributing factors.

Switching from iPhone to Android or vice versa depends on personal interest. Your decision is influenced by the features you consider a priority to you based on how you intend to use your mobile phone.

Individuals who want to improve their social status, take amazing photos, and keep their data secure should shop for an iPhone. If you’re going to download tons of apps, need good storage capacity and longer battery life to support your activities, then you should opt for Android-based smartphones from Google, Samsung among others.