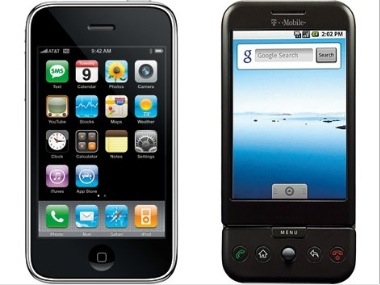 The iPhone was my first smart phone. Up until it was released, I never saw a reason to carry a “smart phone” around with me. They didn’t do what I wanted done in a way that I wanted to do it.

As a result, I never got used to, or addicted to, the Blackberry way of doing things.

With so many iPhones and iPod touches out there (and millions more will be sold this year – recession or not), there is an entire generation that is growing up learning how to type on a mobile device just like I did…with a touch screen.

I recently acquired a T-Mobile G1 – and I do really enjoy the Android OS. One of these days I’ll write up why I think its the Windows of this generation (but not today). The biggest problem I have with the device is the keyboard.

I can’t stand using the physical keyboard. I can’t get my head around it, and I can’t get my fingers to move fast enough for it to be in any way an affective communication tool.

With the iPhone, on the other hand, I can fly across the keys making only minimal mistakes. I’m sure if I’d started on a Blackberry I might feel differently…but I didn’t.

Millions of others haven’t either. So my question to you is – will the next generation…the ones that are getting iPod touches and their first iPhones now…usher in a complete era of the touch screen keyboard? Or will the physical keyboards last another 5 years? Another 10?

I don’t think they will…but I could be wrong.