iPhone Development – Innovative, or a Cop-Out? 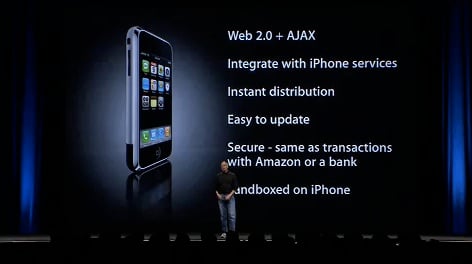 Earlier today I posted some Thoughts on the Keynote, but I didn’t address the iPhone “Web 2.0” development issue on purpose. I think it’s worth a post by itself. After watching the Keynote, then watching it again – this time looking at it a bit differently – I couldn’t help but notice the utter silence that washed over the crowd when it was announced that all 3rd Party iPhone applications would have to be developed through “Web 2.0 and Ajax”.

It wasn’t a stunned silence – the crowd wasn’t amazed with the idea. It was the sound of 5,000 developers being disappointed.

What I find phenomenally insulting is the constant mention of keeping the iPhone safe and secure. The way that it keeps being said makes it sound like developers have the plague or something. It seems , to me anyway, to be disrespectful to the developers that make the Mac so great.

I love my Mac. I love the Apple software on my Mac too…but part of what makes my Mac so great are the Applications that Apple had nothing to do with (Quicksilver, anyone?)…and I can’t understand why they wouldn’t want the same style of innovation on the iPhone.

That’s turning what should be a one button press process into a three button press (and a log in) process. I don’t believe that’s the right way to go about this. If they’re going to require that all applications be web based, they could at least allow you to have an icon on the screen that links directly to the website and stores your log in information. I don’t think that’s asking too much.

The average user is not going to understand, use, or pay for applications this way…and I think that may actually be why they chose this route. That average user is probably going to be fine with the applications that Apple puts on the phone…they probably aren’t going to need many – if any – third party apps. I don’t think Apple thinks that they’re going to be switching any Crackberry addicts…I think they’re targeting iPod owners and people who like shiny, pretty things (of which I am one, btw).

I don’t think Apple is taking third party development seriously on the iPhone because I don’t think they believe it will be an issue. by choosing this route, they can say “we gave you an option” and when it doesn’t take off, it won’t matter. They gave us an option, and we chose not to use it.

Of everything at the Keynote, the only thing I can look at after the fact and say that I’m disappointed about is the iPhone “development method”. An overpriced SDK to keep all the little guys out would have been less disappointing than this. At least THAT would have shown a little respect to the larger companies that have a few extra bucks laying around.

This…something about this just doesn’t sit well with me.