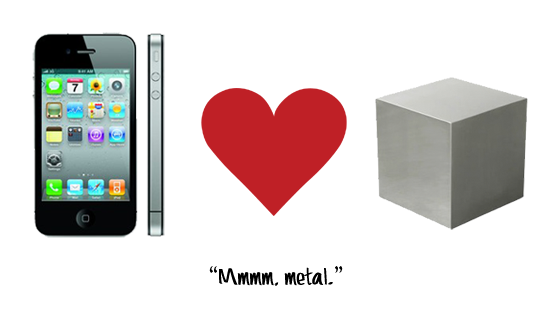 Following the iPad 2’s debut, rumors have shifted to the iPhone 5 which hint at a metal back and a large edge-to-edge display.

The iPhone 5’s design isn’t expected to change dramatically except for the back plate. A prototype at a Foxconn plant has been making rounds and one source talked with 9 To 5 Mac about the phone’s backing. The source said Apple would ditch the glass back found on the iPhone 5 and opt for metal. Issues with painting the glass white and scratches by iPhone owners were cited as the reason for a metal back by another Chinese Source:

According to a Chinese source, Apple is changing the rear part of iPhone 5 to aluminum which was used for first iPhoneâ€™s instead of glass or might adopt the design similar to iPod touch 4G, after facing lots of issues with white paint and scratches on rear glass surface, reported Taiwanâ€™s Economic Daily News.

As of now it’s unknown if Apple will actually opt for metal over aluminum. Crafting the iPhone 5’s back out of aluminum would be a step back in the device’s design timeline â€” something Apple has very rarely done with any product â€” bringing its appearance closer to the original iPhone.

Metal would be a much more likely material as aluminum would require a plastic cover on the antenna to prevent signal loss. The iPhone 4 already has its antennas exposed and on the side making the case for aluminum arguable but from a design standpoint it would simply be a step backward. Metal is the more logical decision – it’s stronger and easier to color than glass.

One of the more prevalent rumors is the iPhone 5 sporting a larger edge-to-edge screen. The screen size is unknown but purported to be 4″ to compete with the larger Android phones on the market such as the Galaxy S and LG’s Optimus. However, the 4″ screen size is just an estimate.