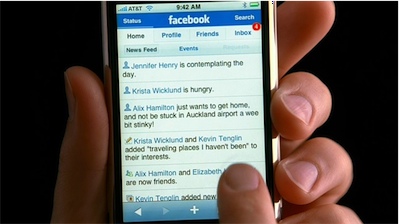 Yesterday Apple released two brand new iPhone ads. They seem to have, thankfully, abandoned the previous campaign which focused on individuals telling iPhone stories. These ads are a return to the original style of iPhone ad, with one entitled “Facebook” showing off the Facebook web app, and another which shows you how you can look up the invoice price of a car over the ‘net while you’re waiting at the dealership.

The “Cars” ad is my favorite iPhone ad of all time – why? Because – FINALLY – it shows you something really useful that you can do with the iPhone. These are the kinds of things that I think should be showcased about the device to really show people why its worth the money.

It makes much more sense to show people something like that, rather than show them how an off-broadway producer can check his blog, you know?