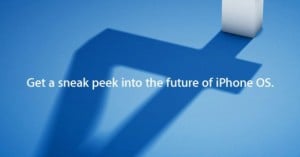 Well this one came over the wire today. Apple is hosting an event this Thursday, April 8th, to discuss the newest version of the iPhone OS, version 4.0. What else do we know about it? Nothing. Not a thing. But what we do know is that it should be pretty neat.

Alright, that’s a lame answer. There have been a lot of rumors around 4.0 in the past few weeks, but there’s been one constant bit of chatter: multitasking. Apparently, Apple has worked out a system to open more than one program at a time, and make it work perfectly.

See, if there’s one thing that I really appreciate about Apple, it’s their ability to spit shine and polish something before putting it out on the market. Remember MMS? That didn’t readily become available until last year, but when it did, it functioned well. Cut and paste? People wondered how they could make it work with the touch interface, and they did it so well that we all forgot that it wasn’t there for years. Now we still have to wait for tethering, but that’s an AT&T thing, not Apple.

The rumor I’ve heard is that the multitasking system is similar to Expose in OSX. I see this being a lot more functional on the iPad than the iPhone, but what happens with one happens to the other.

Thing is, I’ve read that Apple is going to be charging for iPad OS updates, but that’s just a rumor. We’ll see how that all goes down when 4.0 is actually released. In the meantime, place your bets in the comments, and tell us what you think is coming up in iPhone 4.0.