Wired Goes Live on the iPad 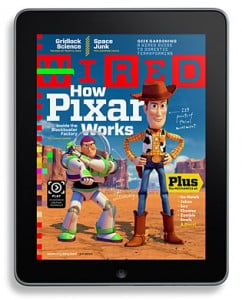 I love Wired magazine. I’ve been a fan since I first picked it up a few years back and I’ve been a subscriber most of that time. Not only is it well written, but it’s also well designed. I think it’s probably my prototype for the perfect magazine. And as of yesterday, Wired is now on the iPad [iTunes Link], and it’s a big leap forward. It’s just not the leap I was hoping for.

First, the price. At $4.99, it’s pricey. With some quick searching you can find a year-long subscription for $10, so $4.99 is a bit steep. Second, the lack of love for subscribers. As a current Wired subscriber, I’d like to think that I could get a copy of the iPad version at a discount or possibly for free. Maybe I could opt into a program to stop the physical version from being sent and get my delivery via iPad. Either way, if I want the convenience of reading my Wired wherever me and my iPad go, I’ve got to pay $4.99 an issue for it.

That’s the other rub: Each issue is in itself an individual app. That’s going to do a few different things to the magazine ecosystem. First, every month when a new magazine comes out it’s going to clog up the App Store and slow down the approval process. This also gives every issue the chance to get rejected, something which Apple will do for what they consider smut or indecent. That means some magazines might not go live on the App store, hurting sales for the company as well.

You know who’s got it right? Marvel [iTunes Link]. I haven’t read comics in over 10 years and in the past month I’ve spent over $50 downloading comics to read. At $1.99 a comic, it seems cheap and affordable, plus it’s ridiculously convenient. It also sucks me deeper into the Marvel universe, making me more likely to buy a comic I’ve never heard of before. I downloaded X23 today for the first time just because it looked good.The day DC does something similar is the day I start losing my lunch money.

Now imagine a Conde Nast app, similar to Marvel’s. I go online and buy the latest copy of Wired, then maybe something in GQ catches my eye so I get that. Maybe I’m at an airport and I feel good about spending $1.99 on a copy of Vogue for the wife to read. It gets me buying things that I wouldn’t normally buy, plus there’s even the potential for back issues. Every magazine that Conde Nast has ever published is now a potential sale on an iPad app. Imagine the money involved with that.

The iPad is still in its infancy, and soon, people will work out the details. I hope Conde Nast is working on my idea – or something similar – and if not, that they come up with something new that makes things better. Either way, one app for one issue just isn’t going to work out. There’s a better way to do it, and I hope Wired does it soon.