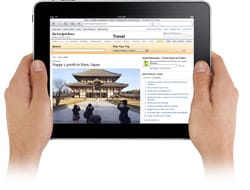 Admit it; You want an iPad. It makes sense, I mean, you’re on the go all the time, and you want the WSJ to look good online, not just iPhone good, right? Sure, it’s pricey, but you’ve made up your mind, put away some shiny coins, and decided that come April – or whenever it’s released – you’re there on opening day. Bring a raincoat, you know what they say about April showers.

Now we’ve got two sites saying that the iPad is going to be available for pre-order online on February 25th: Boy Genius Report and Brighthand. From the post at Brighthand:

According to an unconfirmed report, Apple will start taking pre-orders for the iPad this Thursday.

On Feb. 25, customers will supposedly be able to put down their money for the Wi-Fi-only versions of this device, which Apple has promised to release in late March.

The versions with built-in 3G connectivityÂ are scheduled for release in late April. It is not known when pre-orders for these will begin.

If this is true, then it’s interesting that only the Wi-Fi models are going up for pre-order. That tells me that either AT&T has a contract with Apple to start selling the 3G models on a specific date – presumably to update their network – or that Apple is pushing the Wi-Fi model more for whatever reason. Either way, that means that Thursday we might be getting an e-mail in our inbox confirming the rumor. Fingers crossed.