by Tanner Godarzi 11 years ago5 months ago
2 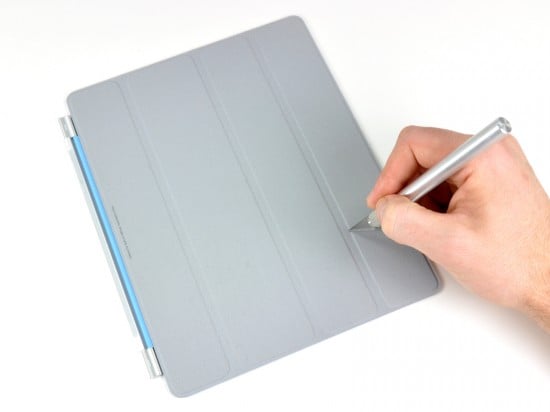 Image credit to iFixit
Apple has touted its newest case-turned-cover which puts the iPad 2 to sleep and wakes when opened. I originally guessed the magic behind Smart Covers was the use of multiple proximity sensors yet it turns out I’m wrong – magnets make the magic happen.

IFixit took a stab (literally) at ripping the iPad’s Smart Cover to shreds to discover what really makes it work. The team found no less than 31 magnets that align the cover, snap it in to place and sleep the iPad. 10 magnets are found inside the iPad and the remaining 21 in the cover.

The iFixt team thought the Smart Cover’s magnets had special properties such as the complex field of patterns found in correlated magnets but turned out to be of the generic -/+ variety. One magnet in the cover is used to trigger the iPad’s sleep sensor which tells the tablet when it should wake and unlock or go back in to sleep mode. The Smart Cover’s remaining 20 magnets are used to form the triangular shape that helps prop the iPad for typing or watching video.

What’s interesting is Apple’s preference to use the much weaker steel-to-magnet bond hence the need for more magnets. To ensure the Smart Cover always lines up in the right way, the iPad has a row of alternating + and – magnets that match the cover’s + and – magnets. This makes it very difficult to put the cover on the wrong way.

Via: Cult Of Mac