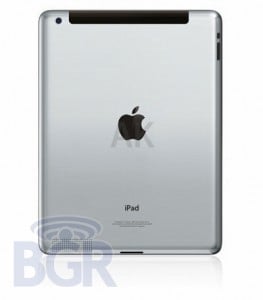 This morning a supposed rendering of the iPad 2 was obtained by Boy Genius Report. The design lines up with rumors that the next generation tablet will sport a FaceTime camera, improved speaker and tapered edges.

The rendering which has been hyped up Blogs as being a leak of the iPad 2 is thought to be the creation of an Apple fan. The supposed fan created mockup takes design cues from third party case manufacturers and other rumors. The design looks similar to the leaked shell that popped up at CES earlier this year.

May Come In White 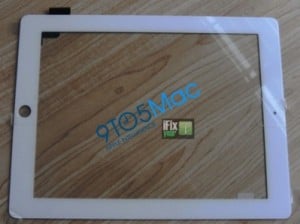 There have been rumors the iPad 2 may have a Carbon Fiber shell but the Aluminum design is likely to stay for another generation. Apple may introduce a white iPad 2 despite the problem with releasing the white iPhone 4. 9 to 5 Mac obtained an image of the iPad 2’s digitizer and bezel in white. An opening at the bezel’s top fits a FaceTime Camera.

Apple has received much criticism for delaying the white iPhone 4 but could have better success with the iPad 2. Combining a white bezel and Aluminum back would reduce potential light leakage. However, a prominent white border surrounding the iPad’s screen would dramatically reduce contrast making the device unusable for long periods due to eye strain. Images would be perceived as brighter and washed out.