Fingers On Review Of iOS 4.2 For The iPad 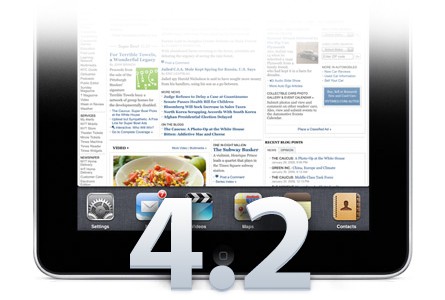 Apple released iOS 4.2 yesterday for the iPad, iPod Touch and iPhone. Here’s my â€˜fingers onâ€™ review with 4.2 for the iPad.

iOS 4.2 measure measures up pretty well. I use my iPad as my main ‘computer’; it goes with my everywhere. I make a living from it doing freelance writing so it’s important that nothing breaks because of a Software update. I didn’t experience any problems updating to the latest version of 4.2 from the first Gold Master build (that had the odd Wifi and VOIP bugs) or upgrading from 3.2 to 4.2.

I feel as if iOS 4.2 makes the iPad a new tablet but the update is a few months overdue. Multitasking and Folders came to the iPhone and iPod Touch before the iPad – knowing that functionally was available for a smaller device and would require a 4 to 5 month wait wasn’t enjoyable. Multitasking on the iPad works, it’s not something you can rave about because its something that should have been there from day one and is a means to an end. It’s fast though – the A4 coupled with 256 MB of RAM can handle running dozens of Apps.

However, multitasking on the iPad does hit a glass ceiling every know and then but it doesn’t sound like your typical breaking glass. Instead, your music is paused. This has happened to me a few times; I’ll be rocking out to a breakdown and listening to song break down in an anti-climatic fade out. At least my running Apps aren’t affected but it’s something you should be aware of.

Both features are great to have on the iPad and push it in the direction of becoming a tablet with computer features instead of a computer trying to be a tablet. I’ve tried AirPrint using a shared printer connected to my Mac and it worked great. Under 3.2, sites that offered a printing feature wouldn’t even load to at least get to a PDF or view an image of something to print. AirPrint automatically brings up a printing dialogue giving you a few options but nothing beyond the standard “print this page x amount of times.”

AirPlay works much the same way but pushes your content to an AppleTV or compatible device. I streamed a rented movie to an AppleTV without a hiccup.

Folders work just like they do on the iPhone and iPod Touch. Folders are another method to organize your Apps but Folders on the iPad can hold up to 20 Apps per folder. The unified mail view is extremely helpful and makes grouping messages much easier. A lot more space is cleared up thanks to threaded messages.

iOS for the iPad is great â€“ it finally brings Folders and Multitasking support along with AirPlay and AirPrint support. 4.2 is paving the way for the iPad to be a serious, serious tablet with a lot of expandability.