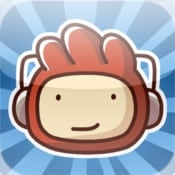 Giving you the power to conjure anything you can imagine is Scribblenauts Remix, a wildly creative game that’s perfectly suited for iOS.

If you’re unfamiliar with the game, it may surprise you to learn that Scribblenauts Remix is a port of the best parts of two Nintendo DS games: Scribblenauts and Super Scribblenauts. The game takes you through level after level where you’re presented with various challenges. To solve these puzzles, you quite literally use your imagination. Just think up an object or a kind of person that can help you, and when you type in the word, that thing is instantly created in the level. If it’s an object, you can grab it and use it to help you; if it’s a person, they have minds of their own and will immediately set out to solve your problem for you. It’s sort of the ultimate sandbox game, because it has a vocabulary of thousands of available words, and when you add adjectives to the mix, you’re presented with hundreds of thousands of possibilities. For example, if you’re presented with a house that’s on fire, you can write the word “fireman” and one will appear to put out the fire for you. But you’ll get different results if you write “angry fireman” or “lazy fireman,” for example. You can call up anything from vehicles to buildings and monsters, and more. Just about any adjective you can think of will change the nature of your creation, so feel free to experiments with descriptors like colors, moods, “giant/tiny,” “cold/hot,” and anything else you can think of. There are also special items like potions, which will fundamentally alter your creations after they’ve been created. One thing that always amazed me about the original game is how they crammed such a huge dictionary of available words/objects into a game made for a system as small as the DS. The second game magnified this enormously, yet the full dictionary appears to have survived the transition to iOS. That said, I thought up several words that the dictionary didn’t recognize. (Though to be fair, I work with words for a living.)

Most of the fun of the game boils down to conjuring multiple things up and seeing what happens when they interact. The game wisely comes with a “playground” mode on the main menu, where you’re set free from the puzzles to create anything you want. Don’t like what you’ve made? There are no penalties to drag anything you want into the trashcan in the top right corner of the screen. If you ever get stuck, there are always hints available to spark your imagination. The levels feel as though they were designed specifically to train you in how to play the game, by showing you the possibilities of what you can do. 50 puzzle levels may sound like a lot, but it goes by remarkably fast, and it pales in comparison to the original game’s 220 levels. Still, Remix costs a fraction of what the DS game sold for, so I guess you get what you pay for. But I found myself hungry for more when it was done. I have no idea if developer 5th Cell has any plans to add more content during the game’s life cycle, but it would be most welcome if so. As it is, it feels like a very abbreviated version of the original. In the DS games, you could type out your words of choice or you could write them out by hand, using the DS’ stylus, and the game was capable of reading your writing (well, more or less). With the iPhone and iPad’s touchscreen capabilities, I was surprised to find that handwriting isn’t supported in Remix. Especially on the iPad, where you have plenty of room to write with your finger, it could have worked quite well. But maybe some sacrifices had to be made to keep the app to a decent download size.

At once both overflowing with possibilities and over far too soon, Scribblenauts Remix is nonetheless a blast to play and works so well on iOS, you might think it was made specifically for this platform.