Square and the iPad 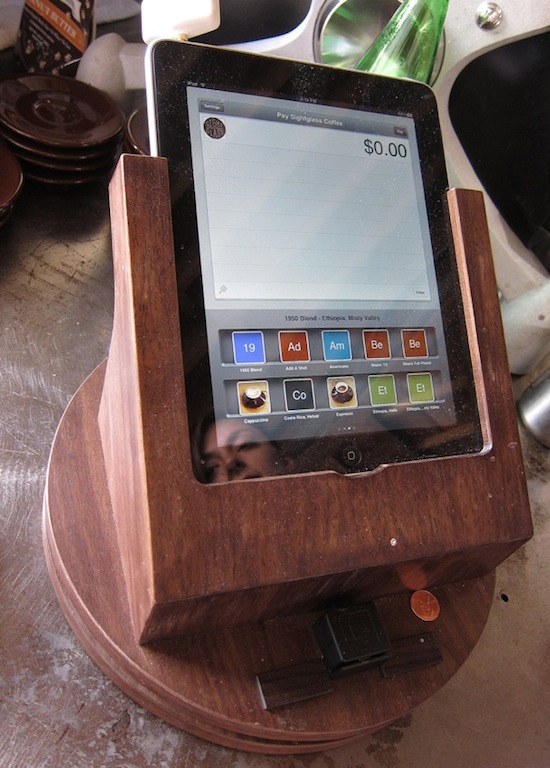 I’ve been a believer in Square products since the first time I heard about them. I interviewed Jack Dorsey – creator of Twitter and co-founder of Square – once for a magazine I used to write for, and not only was he a personable guy, but he sold me on Square even more than I was before. For the uninitiated, the Square is a device that plugs into the headphone jack of your iPad or iPhone, which allows you to accept credit cards for transactions. It’s a brilliant idea, and it will allow the common man to accept credit cards for Craigslist sales or whatever else they want. I’m not fortunate enough to have an iPad, or to have a Square device for my iPhone. But when I heard that their iPad App was out on the market, I knew that people were going to do big things with it, and I couldn’t wait to see what they were.

Well, here’s the first of it. It’s a wooden kiosk at Sightglass Coffee in San Francisco, with an iPad built in. If you look real close at the base of the stand, you’ll see a Square poking out the bottom, ready to accept credit card transactions.Â Although it may seem like an iPad would be an expensive type of cash register to buy, it’s not when compared to the fees associated with most credit cards. Plus, it makes the purchasing process more personal, which is exactly what they want to do with the device.

According to their website, Square is coming to the iPhone and iPod Touch at the end of the month. Once it comes out – and once I get my hands on one – I’ll be sure to let you know.