by Robin Parrish 10 years ago5 months ago
5

Everywhere I look, Paper is all anybody’s talking about this week. This brand new, heavily buzzed iPad app has a lot going for it. Here’s what it is, and why it’s getting so much hype.

The Verge has an excellent, if lengthy, piece on what Paper is and why it’s such a big deal. The long and short of it is that it’s the first app from a company called FiftyThree, a company made up of designers who worked on the Microsoft Courier tablet concept — a concept that techies lusted after but Microsoft unceremoniously cancelled. Paper is nothing like Courier, but it shares a similar design philosophy of humanizing apps by making them simple, powerful, and similar to how we use things in the real world. 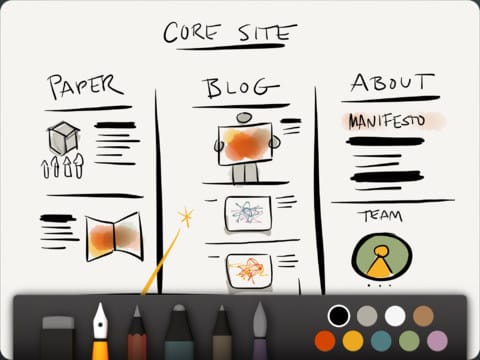 Paper is a sketchbook for ideas, but it’s unlike any notepad or sketchbook app you’ve ever used. That’s because its makers put the most emphasis on honing and fine-tuning the algorithms used to simulate the ways that ink, graphite, markers, and water color brushes interact with paper. The smoothness of these tools, the natural way they feel, the realistic results you get from using them… It’s something you have to experience for yourself to understand how different it is. Already loads of design professionals are using it to sketch out and pitch ideas for things like fashion, film storyboards, and even new apps.

You can create an infinite number of virtual notebooks, which you navigate with swipes and pinches, to collect your ideas in. And one of its most innovative features is its “undo” feature, which has you using a two-finger counter-clockwise gesture to “rewind” your strokes, removing them one-by-one. It’s one of those “wow” ideas that great apps are built on, though my experience with the app showed that the rewind feature is rather finicky often not working right, triggering other gestures or just not registering at all. I’m sure this will be improved with future updates, though. FiftyThree says users can expect lots of updates to the app, including new brushes and new features, in the coming months. 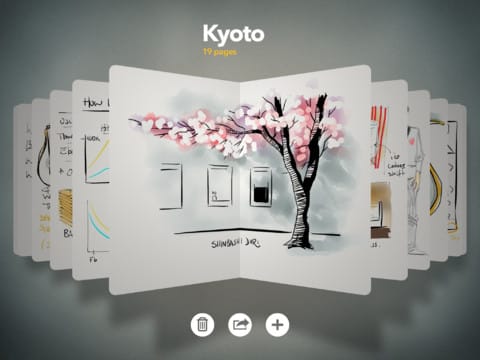 Fortunately, Paper is a free app. The catch is that it comes only with the fountain pen. If you want the other four tools — a soft lead pencil for sketching, a bold marker for outlining, a felt-tip ink pen, and a watercolor brush — they must be purchased separately. They run $1.99 each, or you can buy all four for $7.99. The prices may seem a little steep for in-app purchases, but I think this is one case where a higher app price engenders a sense of higher quality. And the upshot is that you only have to buy the tools you’ll actually use.

By the way, Paper is also optimized for iPad 3’s retina display. It’s also strongly recommended for use with a stylus, to get the best results.