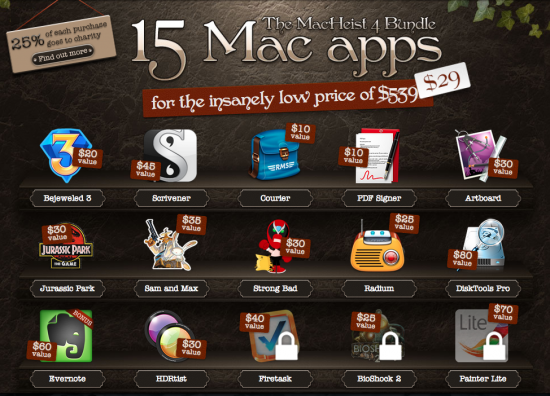 This year’s MacHeist 4 bundle has been revealed, and it’s a killer one. There are 15 Mac apps total, including some heavy hitters like Evernote, Scrivener, DiskTools Pro, and an incredible selection of games, too, all for an unheard-of price of $29.

MacHeist is a unique marketing program for independent Mac app developers, where more than a dozen apps are bundled together for an incredibly low price. It’s primarily used by developers as a fun, public-awareness campaign that raises the profile of their apps.

If you bought these apps separately, you’d have to spend $539, but the MacHeist bundle gives you every one of them for $29. That’s just insane, because many of these apps regularly cost more than $29 all by themselves. And perhaps the best part: 25% of every MacHeist bundle purchase is donated to the charity of your choice.

The apps in the MacHeist 4 bundle are probably the best collection the program has ever offered. Here’s a look at the apps included.

Depending on how many bundles are sold, purchasers may also gain access to these three Bonus Apps:

There’s one catch to all this awesomeness: the bundle is available for a very limited time only. In eight days, MacHeist 4 will be over, so don’t wait! Go grab this amazing deal right now.