Looking back: When Apple wasn’t compatible with anything 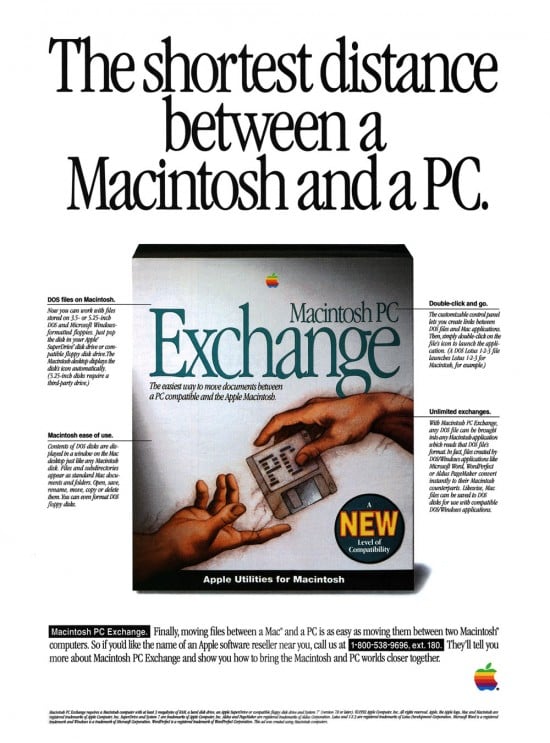 EDIT: It looks like my post on NTFS + FAT32 has taken fire. All I wanted to point out was that it isnâ€™t as easy to get NTFS working out of the box and the solution isnâ€™t apparent to non-Macheads. There are both paid and free solutions to get this done.

That is all I wanted to say and I apologize for not getting it out the first time around.

This is an ad from the pre-OS X days of Apple. Once upon a time, Macs were the underdog choice. A ‘hipster machine’ if you may call it because it wasn’t compatible with … well, everything. And that’s what gave it appeal.

The PC to Mac Exchange was brilliant for its time. It did a total conversion of popular formats including Word, Excel and PageMaker (then by Aldus) once you inserted the files using a 5 1/4 or 3.5 floppy disk into your Mac’s drive.

Ironically, there are still quite a number of people who still ask if buying a Mac will allow them to work with Microsoft Office files. In an age where document formats are not as isolating as before (today you can open standard office files from the cloud on Google Docs), it’s surprising how some people still think this.

What Apple hasn’t fixed however is native support for the NTSF file system as Macs still run on FAT32. OR RATHER, Apple will never run on NTFS because it’s a double edged sword that can cause more problems than it’s worth. For those unfamiliar, Apple hard disks run on an older FAT32 system that is deemed more “reliable” as a consumer product compared to NTFS which is used by Windows. The main advantage of NTFS is that it allows for huge files to be stored .. we’re talking about files above 4GB. And this stats to matter if you’re storing HD movies in your hard drive. Imagine an external HD that can’t be accessed by your Mac because it’s formatted on NTFS.

And the concludes today’s trip down memory lane.