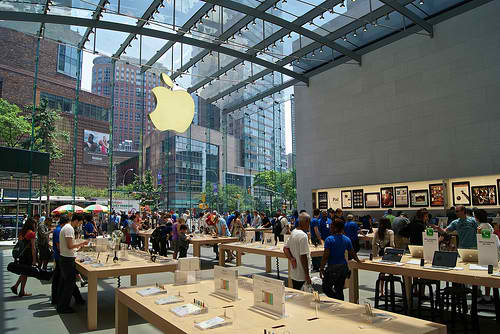 Apple’s many products are huge sellers and bring a lot of attention to the company. One way, Apple has made Apple products more ubiquitous at the consumer level are the many Apple Stores that operate in many major cities all over the US (and in the rest of the world). Apple Stores are hip places where you can get your desired Apple product in an environment that celebrates all things Apple. Unfortunately, not all cities have Apple Stores. This means people who want to buy Apple products have no choice but to either online or shop at electronics stores and malls.

If you’re still hankering for that “Apple Store” experience even without an actual Apple Store in your area, you may be in luck. There are talks that Apple will begin opening up small Apple Stores inside the premises of Sam’s Club.

Sam’s Club is a member’s only warehouse club, and even if the image it evokes is bulk shopping, it does have a very nice electronics department that sells Apple products – iPhones, iPods, and iPads. With rumored negotiations with Apple, what consumers will see are store-in-store setups that will also begin selling Macs and Apple computers. Reportedly, a backup to the store-in-store concept would be for Sam’s Club to sell Apple laptops and desktops even without the mini stores.

Even though this is still officially just a rumor, there are a lot of evidence that suggests a partnership between Apple and Sam’s Club is not totally far-fetched. Apple already has a similar setup in many Best Buy outlets so the same setup in Sam’s Club is perfectly feasible.