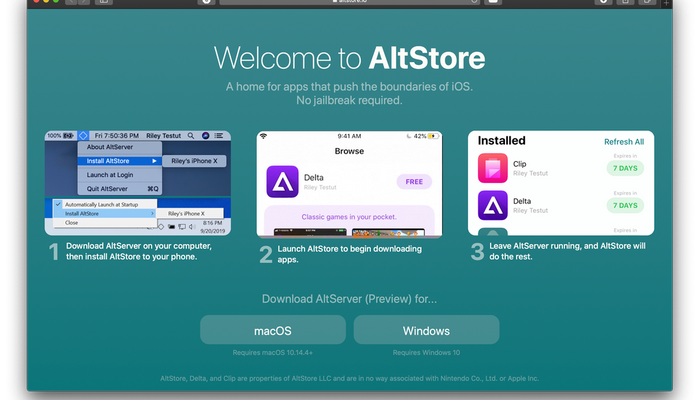 The days of jailbreaking your iPhone just to install some unofficial applications might finally be coming to an end. AltStore, a third-party app repository for iOS, is now being regarded as an Apple App Store alternative. According to the developers, the biggest strength of AltStore is not requiring its users to jailbreak their iPhones.

Any iPhone or Apple device user is surely aware that the company has some rigid policies regarding what apps you install. Hence numerous jailbreak procedures, particularly for iPhones, have surfaced over the years. AltStore, developed by Riley Testut and his team are addressing this hurdle for iPhone users. Testut himself has announced that AltStore will be the de facto Apple App Store alternative; no jailbreaking is required. Meanwhile, Testut has already thought ahead regarding Apple’s routine crackdowns on shady third-party software and is confident that AltStore will be spared from such a fate.

“Unlike other unofficial app stores today, AltStore does not rely on enterprise certificates, which Apple has been cracking down on more and more recently. Instead, it relies on a lesser-known developer feature that allows you to use your Apple ID to install apps you’ve developed yourself with Xcode, Apple’s development toolkit,” explained Testut. Apple can still try to dismantle AltStore if it wants but that would require an intricate tweak in iOS and quite a lot of work. Users will still have to use it at their own risk.

“This is intended for people who might otherwise be unable to purchase a $99/yr developer account themselves (such as students) — but as it turns out there’s no technical reason why it’s limited to just apps installed from Xcode,” added Testut, meaning the AltStore was made with less financially-capable iPhone users in mind.

At the moment, there are only a handful of apps available for AltStore but Testut assures everyone that the library will become more populated after AltStore officially launches on September 28.

RELATED: 8 Things to Do Before You Publish an App to the App Store