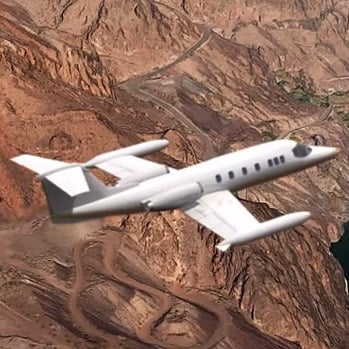 How does Apple create those 3D “Flyover” Maps of major cities? And why are they such a mess when you zoom in close?

Apple’s Flyover maps come from a Swedish company it purchased in August of last year (2011) called C3 Technologies. C3 came up with a unique method of having software automatically generate 3D maps of major cities. But to understand what makes it different, let’s first rewind a bit.

Before C3 came along, online 3D maps like those seen in Google Earth were made by volunteers who were willing to create or draw wireframe models (in a program like SketchUp), upon which photo “skins” of buildings and landmarks would be manually applied. It’s time-consuming, it’s labor-intensive, and the results are typically low-resolution. Zooming in… Times Square is right in the center.

C3 Technologies’ mapping software is based on a technology originally created by Saab as a means of guiding missiles to their targets. Because of this, C3’s accuracy is said to be give or take six inches. (Stay with me, we’ll come back to that claim in a minute.) C3 had the inspired idea of taking this guided missile tracking tech and turned it into a 3D mapping solution that’s based entirely on photography — no 3D modelling required. Think about that for a second. C3’s method cut out a huge, time-consuming step of the process, and automated the rest, creating a solution that’s better looking and significantly cheaper to produce. C3 created its maps by flying multiple passes over a city with a specialized plane, at a height of just 1,600 feet. The plane takes photos with a customized setup of several professional-grade digital single-lens reflex cameras. (Exactly how many cameras these high-tech planes use is a closely-guarded trade secret.) These cameras captured images at precise angles from the ground to capture the sides of structures, and from top down to capture rooftops and ground surfaces. Those photos would then be fed into C3’s proprietary software, which had an algorithm that compared overlapping images to determine stereoscopic depth. A little processing time later and presto: you’ve got a 3D city model that’s high-res, and that’s a lot more accurate than has ever before been possible by automated modelling software.

Check out this early C3 Technologies video for a brief guided tour of its process.

As cool and cutting-edge as this technology is, anyone who’s zoomed in in Apple Maps knows that it’s far from perfect. Cities, structures, and roads look great at low to medium magnification, but when viewed at highest magnification, cities look distorted, bent, and warped, like everything’s made of rubber that’s melting, or like Godzilla has gone around stomping and smashing everything. There’s no definitive answer, because of course Apple isn’t talking. They just acquired C3 Technologies a little over a year ago, so the last year has likely been spent mostly on integrating C3’s work within Apple’s systems. At least 20 of the cities that are available in 3D now had already been mapped before Apple snatched up the fledgling company. But here’s what I think is going on.

First, C3’s photography-and-algorithm based technology is new, and the stereoscopic depth it creates obviously hasn’t been perfected yet. That “six inch” give-or-take thing with the accuracy seems like a mighty conservative estimate when you see the bizarre distortion of the maps up close.

Second, before C3 was acquired by Apple (and thereby inducted into ultra-secrecy mode), they claimed that their mapping algorithm was “98% accurate.” That 2% represents manual correction that must be done by C3 — er, Apple — staff. Again, the visuals inside Apple Maps show that maybe that 2% is a conservative estimate, as there’s quite a lot of manual correction still needed. Whoa! Did a bomb just go off in Manhattan?!

Personally, I hope that Apple will keep adding cities to its list of 3D maps. The technology has incredible potential. But before that happens, it seems clear that they need to go in and do some serious cleanup on what they’ve already got.