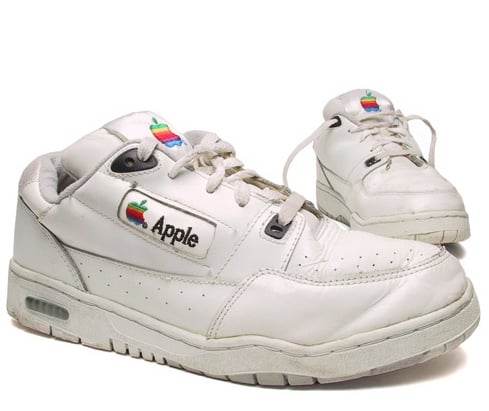 It’s been a while since we’ve done a flashback (there’s only so much Apple History to cover after all), but while I was looking for an image of Apple HQ this morning, I stumbled across these wonderful Apple Shoes.

These sneakers were given to Apple employees in the 1990s (during the time period before Steve returned). They feature the vintage Apple “rainbow” logo embroidered into the tongue and the sides of the shoes.

I don’t know if they were prototypes for a possible retail line of shoes, or simply a company gift in the same way that other apparel has been in the past (I would imagine that’s the more likely scenario), but the shoes are definitely a rare find. Occasionally they will pop-up on eBay or other auction sites. The last pair I was able to find online was heavily worn, and sold for $75.

If you can spread any more light into the story of these Apple logo shoes, feel free to leave comments below.