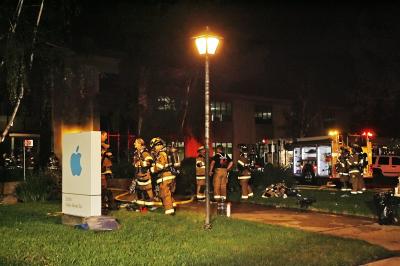 The fire was first reported by Apple employees around 10PM Pacific Time. The flames erupted at Valley Green Six, 20605 Valley Green Drive, and produced a heavy amount of smoke. The blaze eventually earned 3-alarm status and more than 60 firefighters, some from as far away as San Jose, Sana Clara, and Los Altos were on the scene according to the Mercury News.

The deputy chief for Santa Clara County Fire has speculated that the source of the blaze may be an air conditioner on the second floor of the building where the blaze started. The fire was finally contained around 12:30AM, and currently the amount of property damage is unknown.