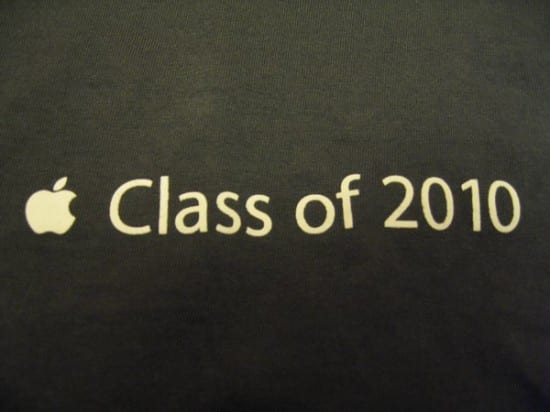 Found on eBay: an ultra-rare Apple t-shirt that just sold a few weeks ago on eBay that you can’t buy in any store. This t-shirt was the standard gift given to new employees at Apple’s headquarters in Cupertino, California.

I’ve been reading Adam Lashinsky’s Inside Apple lately. It’s a fascinating read, I highly recommend it. I’ll be posting a review of it soonish. 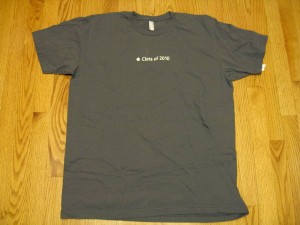 In the book’s second chapter, Lashinsky writes about what happens to new employees at Apple Headquarters on their first day of work:

All new employees attend a half day of orientation, always on a Monday — unless Monday is a holiday. Much of the orientation is standard big-company stuff: a welcome package with stickers saying you’ve joined Apple, HR forms and the like, as well as a t-shirt that says “CLASS OF” with the current year emblazoned on the front.”

Curious what one of these shirts looked like, I hopped online and ran a search to see if I could find an image of one. I turned up just one example, and it was, of all places, on eBay, where a seller going by the handle “bookdude8-half” sold a “Class of 2010” shirt in late March. In standard Apple style, the charcoal gray shirt sports an understated, simple design, with nothing but a small Apple logo alongside the words, which are written across the chest area. It’s blank on the back, and its collar tag indicates it’s an American Apparel t-shirt.

It’s very much like the free shirts sometimes given away to the first customers at new Apple retail stores grand openings. Those shirts feature the exact same design, only with the name/location of the store instead of the class year.

In case you’re wondering, this incredibly rare shirt sold for a paltry $24.99. Somebody scored a serious bargain.