by Apple Gazette 2 years ago10 months ago

Sooner or later, most electronic devices start having performance issues, and Macs are no exception. Once your device starts slowing down, the same tasks that could be done within a couple of minutes before, begin to take longer and longer. You may start experiencing issues such as slower response time, longer system bootup, delays, and lags when working with applications or while browsing the web.

Being one of the most important elements of any system, the speed of running processes can drastically affect both user experience and productivity.  As a matter of fact, speed decline is one of the top reasons why Mac users turn to IT-professionals or search for advice online to resolve this issue as quickly as possible.

There can be several reasons for decreased performance. Firstly, there is the wearing down of hardware components within your Mac over time. Secondly, there are certain processes and items within your system that can lead to a slower speed.

The truth is that users can have direct control over a lot of these factors and, therefore, can take the necessary steps to reduce the degree to which their Mac is affected by them.

In this guide, we will describe the major causes of performance decline in Macs that are not related to hardware problems. We will also describe a few different methods of solving these by using Outbyte MacRepair – cleaning and optimizing software that can help users keep their devices well-maintained.

Factors That May Cause Slow Mac Performance

Macs need to have some amount of free storage to perform at an optimal speed. This storage is constantly used by Mac itself as well as applications installed on it for creating swap files, cache, temporary files, etc. Apart from that, there might be large unneeded files or applications taking up a lot of space. Some sources say that having around 15% of free disk space should be enough for Macs to run all the necessary processes smoothly.

Your Mac’s storage needs to be monitored and cleaned up on a regular basis for you not to run into this issue. It may be somewhat complicated for non-advanced users to find all junk as well as other types of files that can be removed, such as duplicates, large & old files, etc. 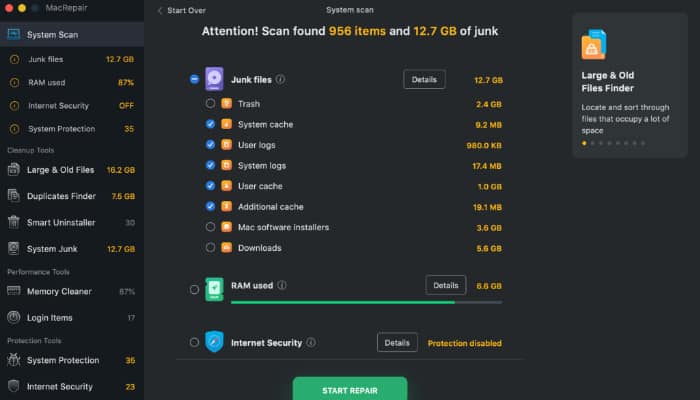 Outbyte MacRepair solves this problem by scanning the user’s system for all of these files. Once detected, they can be safely removed by hitting the Repair button.

Another way to free up space with Outbyte MacRepair is by using its Uninstaller tool. Not only does it allow you to detect and uninstall any application from the system, but it also can remove applications completely without any leftovers remaining in storage.

2) Too many apps running in the background

Each app running on your devices consumes a certain amount of RAM (memory). Since the amount of RAM is limited, your Mac can slow down if the memory is used by too many apps at the same time.

Closing the apps you don’t need at the time can help you free up RAM that can be used by other, more essential programs or processes. 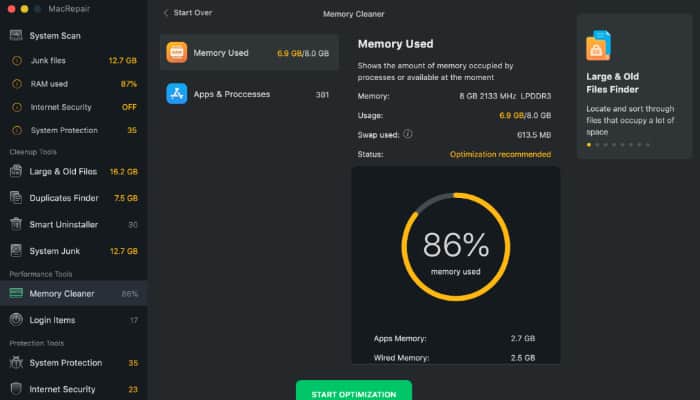 Outbyte MacRepair’s Memory Cleaner tool monitors the amount of available memory in real-time and allows users to quit the apps and processes currently running on their device. This can lead to improved performance via freeing up RAM that was previously occupied.

3) Login items slowing down your system’s bootup and performance

Similar to different opened apps that can slow down your Mac after you launched it, there are some programs that may be opening already at system startup. Each of them also requires a certain amount of memory to operate, which can affect your Mac’s bootup speed.

Disabling startup programs can help your system boot up faster and improve its overall performance by allocating more RAM resources to other processes. 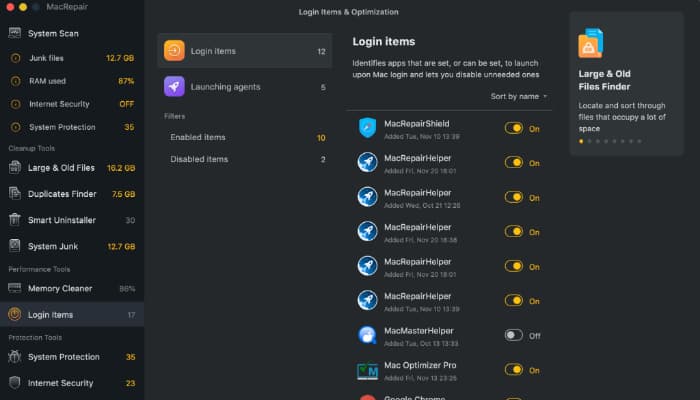 The Login Items tool identifies apps that launch at system startup and lets you disable the ones you consider unneeded.

In some cases, performance issues may be caused by potentially unwanted programs (PUPs) installed on your Mac. Such programs can run hidden processes in the background aimed at collecting your data or using your system’s resources that may lead to decreased speed.

Removing potentially unwanted applications may have a positive effect on your Mac speed as it can free up the memory that was used up by these programs. 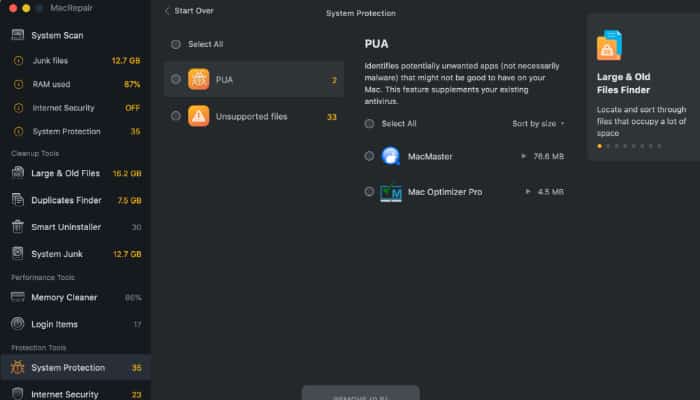 Outbyte MacRepair has a dedicated System Protection tool that can detect and remove PUPs from your system. However, the program does not fully replace antivirus software and rather compliments it.

Most Mac users have at least once experienced instances when their device’s speed was not as fast as it should be. In a lot of cases, the causes of this issue can be addressed and solved with regular maintenance and activities such as system cleanup, quitting or removing unneeded apps, and providing basic security for your device.

To put it simply, the more a user takes care of their Mac, the lower are the chances of running into issues both in the long- as well as the short-term. Outbyte MacRepair allows users to perform Mac maintenance tasks easily and safely with its clear user-interface and intuitive menus. By using the tips outlined in this guide, you can make sure that factors that can negatively affect your device’s performance are minimized.