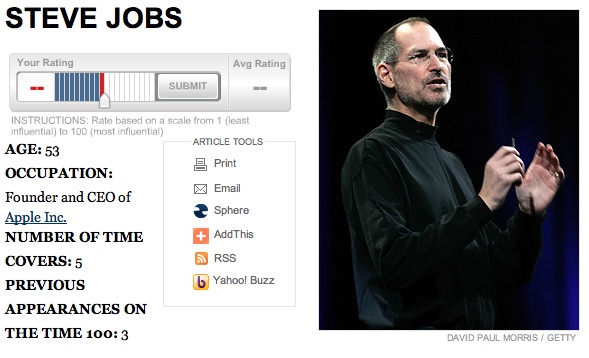 Ok, everyone, put your fanboy caps on – it’s time to vote.

Steve Jobs is one of the people currently listed in Time Magazine’s online poll for the Top 100 ‘World’s Most Influential People’.

There’s just one problem – he’s only got a rating of 25 right now, while guys like Bill Gates have a 47, and Steve Ballmer has a 39.

Now, I don’t know about you, but the idea that the guy that spearheads the company that leads in innovation across the world could come in ranked lower than Steve Ballmer…well…that makes me a little sick inside. This is the year of the iPhone we’re talking about here – what other piece of tech was more influential than that this past year?

So it’s time to get out there and vote! Click here to vote for Steve, and be sure you read the rules. You’re voting on a scale of 1 to 100 – and 1 is the worst, 100 is the best. It’s not what rank they should be, but how influential they are on the scale.