The iPhone and Verizon have a long and storied history. As soon as the iPhone was announced on Cingular (then AT&T after a merger), rumors swirled the phone would come to Verizon. After 4 years and millions of iPhones sold, Verizon is holding an event January 11th – could the iPhone 4 be coming a CDMA flavor?

The invite, published by All Things D and Macrumors was sent to prominent Apple bloggers and journalists. 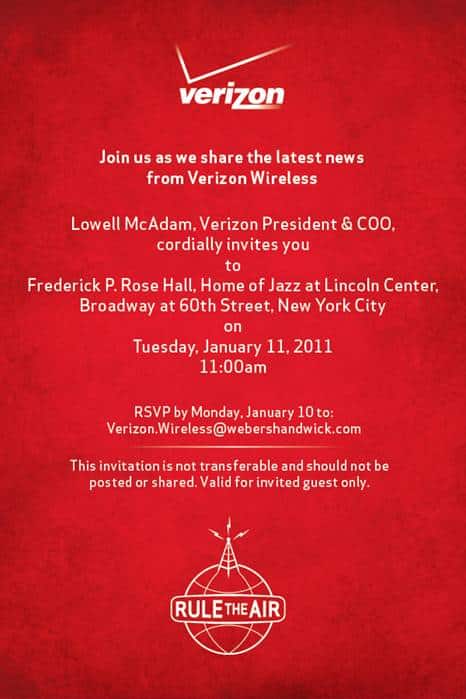 The timing of the event falls in line with a mandate Apple sent retail employees asking them not to take a vacation for three weeks starting at the end of January. It is unknown if Steve Jobs will join the stage with Verizon president and COO Lowell McAdam

There are other clues pointing towards Apple’s involvement and possibly Steve Jobs’ attendance. Gizmodo, which allegedly has a great relationship with Verizon was not sent an invite.

Here’s what’s key: We’re great friends with Verizon. (Hi guys!) We’ve worked with them for years, and we’ve been to like every event they’ve had over the last three years. We haven’t gotten an invite. Which is weird. We’ve reached out to Verizon to see why, exactly, we weren’t invited, but we’ve gotten no comment yet. (Update: Verizon’s official response is a big ol’ no comment.)