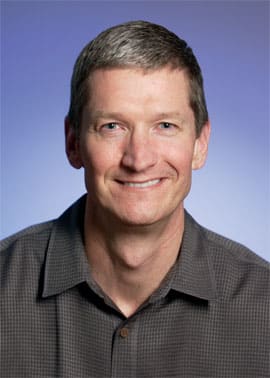 It wasn’t that long ago that we were all fearing for Steve Jobs’ life. Before the big transplant, rumors were swirling about how thin he was, where he was going and what was going to happen next. When he did decide to take that time off, he put his right-hand man in charge: Chief Operating Officer Tim Cook.

Well, Steve and the company wanted to say thanks, so they did. With large sums of money. From BusinessWeek:

Apple Chief Operating Officer Tim Cook earned a US$5 million cash bonus plus stock that could be worth nearly $17 million for the six months last year that he took the helm of the company.

In aÂ filing with the U.S. Securities and Exchange Commission on Friday, Apple said its compensation committee had unanimously approved the bonus, which was recommended by CEO Steve Jobs.

Jobs said Cook deserved the bonus “in recognition of his outstanding performance” during the period Cook ran the company while Jobs was on medical leave.

Along with the cash, Cook was awarded 75,000 restricted pieces of stock. Half of them vest in March next year and the other half the following year. At Friday’s closing price, the stock is worth nearly $17 million.

Wow. No better way to say thank you, I suppose.

Although Steve is healthy now, there has been a lot of talk about who would replace him as the head of the company. I’m sure a lot of people will have suggestions, but I’d place a good chunk of change on Tim Cook taking over. Who knows when it’ll happen, but Steve can’t live forever. The big question when he does pass will be if the company goes with him.