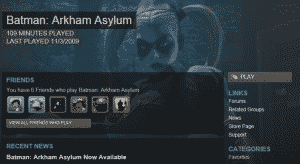 I’m a pretty big video game guy, but I’m more focused on consoles than the computer. That’s mostly because since I switched to an all-Mac household, I haven’t been able to find any decent games worth spending money on, with the possible exception of The Sims 3. Truthfully though, I’ve never really been into the computer versions of my favorite consoles, and I’m not sure why. I may be changing my mind about this though in the coming months.

Valve introduced a new beta version of Steam this week, and with it comes some healthy speculation about their involvement with Mac gaming, which up until now, has been non-existent. Kotaku has the report:

Steam forum members dug through newly released files from the recently launched open beta and dug up a handful of Mac OS X-specific graphics, like the open, maximize and minimize jewel icons that are used in the operating system’s windows.

While those icons could be chalked up to Steam’s change to a WebKit-based rendering engine for the clientâ€”Valve has moved away from Microsoft’s Internet Explorer for Steam’s new UIâ€”there are a few other Mac-specific graphics buried within. That includes system dock graphics and a handful of OS X menu files.

This is all just theory at the moment, but this could also mean a few really big things for the Mac. For years, Apple computers have been touted as great products for designers, but not serious rigs for gamers. With the graphics cards, ram and processor speeds currently available on most MacBook Pros and Mac Pros, the only reason that gamers couldn’t use the computers was the lack of games. Software developers seem to develop first for the PC, then go Mac only if the title is big enough, and only years later.

Should Valve be bringing Steam to the Mac, it legitimizes the Apple as a gaming platform. It could help those gamers that are waffling between a Mac and PC have an easier decision to make. It also opens up a new market for Valve, so it does make sense.