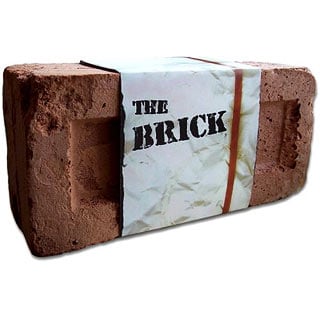 Well the rumor mill is going crazy about “The Brick”. It’s supposed to be the big thing at the Apple Macbook event in October – if the rumor from 9to5Mac is to be believed. The big question is – what is it?

One theory, is that it’s a wireless USB hub. That would be cool, and would certainly make sense with the Macbook Air.

I don’t think that’s it though.

I mean really – when we’re talking about “The Brick” – what part of your computer do you call “the brick”? I believe that would be the POWER BRICK. So – with that in mind – what could this “brick”thing be?

My guess is that its a wireless power adapter. You plug it in – stay within range, and it charges your battery. Apple has filed patents for technology like this already – so its not completely out of the realm of possibility. If this is what it is it could be the transition product Apple was talking about earlier this year (although I think its still debatable that the iPod Touch may be that product).

So what do you think? Is this insane, or could it be a possibility?