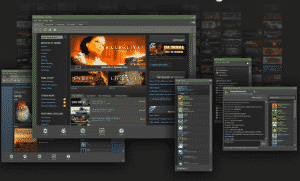 For years, the Mac gaming has been about kids games, new releases released a year after the PC version ships, and lousy gameplay. Now, it’s all been changed.

We first posted about this back in February, but now it’s all been confirmed. Steam is coming to the Mac.

For the uninitiated, here’s what Steam is, according to their website.

Now take out all of those “PC” references and swap them with “Mac,” and you’ve got online gaming for the Mac, all ready to go.

“Our Steam partners, who are delivering over a thousand games to 25 million Steam clients, are very excited about adding support for the Mac,” said Jason Holtman, Director of Business Development at Valve. “Steamworks for the Mac supports all of the Steamworks APIs, and we have added a new feature, called Steam Play, which allows customers who purchase the product for the Mac or Windows to play on the other platform free of charge. For example, Steam Play, in combination with the Steam Cloud, allows a gamer playing on their work PC to go home and pick up playing the same game at the same point on their home Mac. We expect most developers and publishers to take advantage of Steam Play.”

Meaning, if you already play Steam games on your Boot Camp drive or on another PC, you don’t have to buy anything new to play on the Mac. They also announced that the Mac is going to be under the same release schedule as games for Windows and the XBox 360. All of a sudden, things are looking up.