So you want Games in OSX? Go make them with... 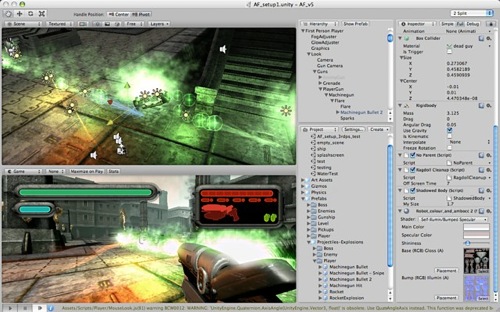 Unity is a spectacular piece of software that has received a major upgrade this week. For those of you not aware, Unity is an extremely powerful cross platform game creation tool. The update include over 50 new features including the ability to play video files as textures on any surface, performance improvements, Direct X 9 support for Windows, and more.

There are extensive manuals included to help you get to know and love everything that Unity is.

Unity can not only make stand alone games, but you can also create content for the web using the Unity Web Player. The installation process of the Web Player has been greatly simplified, and support for Safari 3 for Windows has been added. Also the files compress about 30% better now, resulting in faster load times for content.

The Unity Editor itself has received a major over haul as well including a new skin, new buttons, new icons, and new gizmos. You can import your old Unity files into the new system, and take advantage of all the improvements. In addition to the new look, the Unity Editor is also much faster now when dealing with complex projects.

Now, here’s the most amazing part. This complete system that allows you to create your own games, and sell them, only cost $200 for indy developers. Professionals have to pay a slighly loftier $1,500 – but it’s honestly a bargain at either price.

Now – quit complaining about their being no OSX games – GO MAKE SOME!

A Free 30 trial (with no feature limitations) is available right here.
via MacNN