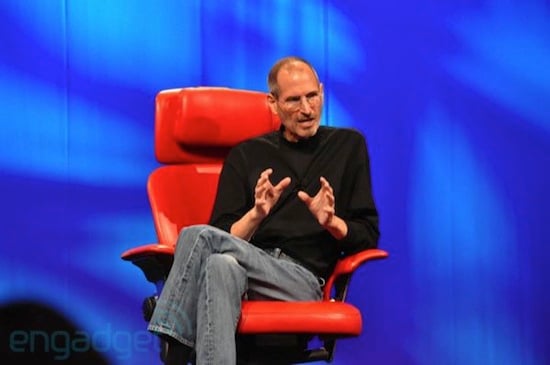 Last night, Steve Jobs appeared on D8, the All Things Digital Conference, and answered questions for about an hour or so. Engadget covered the event live, and in their transcript are a few interesting things about Steve, Apple, and the future of media. So what I decided to do was take these quotes, then provide some thought on the subject. You with me? Here goes.

Q: Hi, I’m from Hillcrest Labs… do you think it’s time to throw out the interface for TV? When will Apple do something there?

A: The problem with innovation in the TV industry is the go to market strategy. The TV industry has a subsidized model that gives everyone a set top box for free. So no one wants to buy a box. Ask TiVo, ask Roku, ask us… ask Google in a few months. So all you can do is ADD a box to the TV. You just end up with a table full of remotes, a cluster of boxes… and that’s what we have today. The only way that’s going to change is if you tear up the set top box, give it a new UI, and get it in front of consumers in a way they’re going to want it. The TV is going to lose in our eyes until there is a better go to market strategy… otherwise you’re just making another TiVo.

This explains completely why AppleTV is just a hobby for the company. They want full control – just like everyone else does – and it seems impossible for them to get there. My theory here is that Apple is going to come out with their own television set – or line of them, as it were – with built-in capabilities. Thus, they eliminate the second box, and still have the control they want.

Q: Steve, we love our iPhones… but our concern is that we can’t make a phone call on it. Is someone working on that?

A: Well, we’re talking about it. You can bet we’re doing everything we know how to do.

Q: Can we expect something soon?

A: I’ll tell you what I’m told — (LONG pause) — to make things better, people reallocate spectrum, and they do things like increase the backhaul, so they put in gigabit Ethernet instead of T1… things get worse before they get better. If you believe that, things should be getting a lot better soon!

A: I’m told that a lot of places are getting better certainly by the end of this summer.

Kara: And if they don’t get better?

Steve: Then they won’t.

They obviously can’t announce a Verizon/Nextel/T-Mobile iPhone at this conference, so it’s not surprising that he didn’t drop that bomb. However, you can just sense his frustration with AT&T. Something is going to happen here, it’s a matter of when.

Kara: What do you imagine the next 10 years of your life will be about?

Steve: You know, when this whole thing with Gizmodo happened, I got advice from people who said ‘you gotta just let it slide, you shouldn’t go after a journalist just because they bought stolen property and tried to extort you.’ And I thought deeply about this, and I concluded the worst thing that could happen is if we change our core values and let it slide. I can’t do that. I’d rather quit.

Steve: You go back 5 or 10 years, what would you do… we’re not going into that… we have the same values that we had back then. The core values are the same. We come into work wanting to do the same thing that we did back then — build the best products. Nothing makes my day more than getting a random email from someone talking about how cool the iPad is. That’s what keeps me going. That’s what kept me going back then, and now, and will keep me going in the future.

I think it’s interesting that he addressed the Gizmodo issue, because up until now, I haven’t heard him say anything about it directly. But you can tell that he’s tired of people stepping in his garden, and so he’s just not going to take it. Do I blame him? No. But then again, my opinion on the topic has been pretty clear.

Walt: So you made iWork for the iPad. Do you see things that the iPad can’t do?

Steve: Well, you can imagine all sorts of things for the iPad. Video editing, content creation…

Walt: Does it require a faster processor?

Steve: Well time has a way of working these things out.

I think video editing on the iPad could be brilliant, but there has to be matching storage and a way to move those videos as well. Movies take up a lot of hard drive real estate, and 64GB isn’t going to cut it.

Walt: So when you built this OS, you did it in a phone. Why? Why not a tablet first.

Steve: I’ll tell you. Actually. It started on a tablet first. I had this idea about having a glass display, a multitouch display you could type on. I asked our people about it. And six months later they came back with this amazing display. And I gave it to one of our really brilliant UI guys. He then got inertial scrolling working and some other things, and I thought, ‘my god, we can build a phone with this’ and we put the tablet aside, and we went to work on the phone.

It’s pretty cool to peer behind the curtain and see what Apple does. To think that the iPad actually predated the iPhone in theory, really says something about the company as a whole. Thing is, 2007 wasn’t the year for the tablet, and I’m guessing they knew it. By doing the iPhone first – something people were yearning for – they got the UI out there for the iPad. Sometimes working backwards is the best way.

Any other thoughts on Steve and the conference? We’re hovering around 2 weeks until WWDC, and the next big announcement from Apple. Does this change your mind about what’s to come? Let us know in the comments.