by Kevin Whipps 13 years ago3 months ago
4 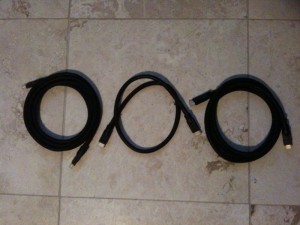 Santa was good to the Whipps family this year. Although I didn’t get everything I wanted, the biggie was right there under the tree: A shiny, PS3 slim. I’m a bit of a console nut, and so is my wife. We have every Nintendo, Microsoft and Sony console ever built, and even a Sega Genesis for fun. A few months ago, we had a room dedicated to our gaming, which was not only cool, but kept everything nicely organized. But when my wife found out she was pregnant in July, we stripped down the room and made it the new spot for the baby. That meant we moved all of our consoles into the living room, next to our DVD player and AppleTV.

For a long time, the AppleTV was the only thing in the house setup on an HDMI cable, and that’s because our Samsung DLP TV only has one HDMI input. That wasn’t a big deal until we got the PS3, and next thing I knew, we needed to get an HDMI switcher, plus extra cables.

Ever been down the cable aisle in a Best Buy? It’s covered with landmines and all sorts of nasty stuff, including $100 gold-plated cables that promise a better signal, even though I know that no amount of plating is going to make the series of bits sent over the digital connection any clearer. Every cable is expensive there, and I knew there was another alternative. I just had to sign on.

It’s called Monoprice.com, and I had heard of them before because of their super-cheap Mac cables, plus their mini-display port to HDMI plug. Â I had never ordered from them before, but an IT friend of mine spoke highly of their customer service, so I gave it a shot. Saturday the 26th, I ordered three HDMI cables in varying lengths, totaling just under $30.

Since the total weight was under 10 lbs, I was offered free overnight shipping. It was a Saturday, so I figured that come Tuesday, everything would be at the house, good to go. I ordered it with overnight shipping and went on my way.

The next morning, I get an e-mail from Monoprice saying that my order had shipped. “Whatever,” I think to myself. “Must be their automated system. It’s the Sunday after Christmas, no way they’ve been shipped out.”

Flash to Monday morning. It’s 7:45 a.m. and I’m on the couch in my boxers and a t-shirt eating breakfast while watching a DVR’d episode of Dirty Jobs, when the doorbell rings. I was obviously indisposed, so my wife answers the door to find a box sitting there, all nice and happy. Sure enough, three cables from Monoprice were inside, exactly what I had ordered. A few hours later, the cables were hooked to the AppleTV and everything was good to go.

Most of the time I write about new Mac apps, or cool things for the iPhone, but sometimes it’s important to note that there’s someone out there who has our back. Not only does Monoprice carry Mac adaptors for way cheaper than Apple, but they’re quick about it too. In my book, that means a lot.