You are here: Home / iPad / Mozilla Making Browser for iPad 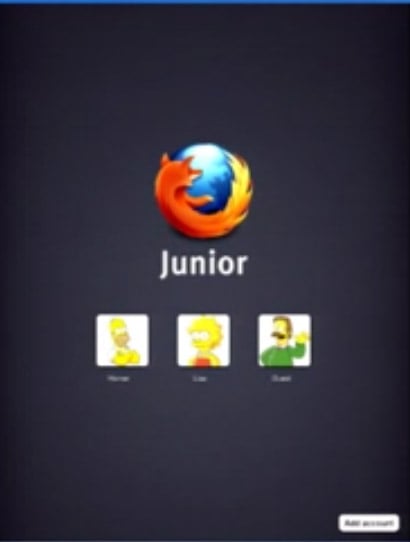 When it comes to web browsers, the public has three primary choices: Internet Explorer (blech), Mozilla’s Firefox, and Google Chrome. With the exploding popularity of the iPad, why have none of them come to the world’s greatest tablet? Finally, that’s about to change.

At long last, Mozilla is making a browser for iPad. But rather than simply port Firefox to the tablet, Mozilla is creating something brand new.

They’re calling it Junior, and it’s an entirely new experience, re-invented from the ground up specifically “for a new form factor.” In the works for several months now, Junior isn’t able to use Mozilla’s own rendering engine, since Safari code is baked in to iOS’s framework. But they’re going to make the best of it by creating a minimalistic, intuitive interface with full-screen browsing.

There are just two primary buttons on the browser, floating about halfway up the screen. On the left there’s a back button, on the right is a button with a plus symbol on it. Tapping this button brings up a menu with three sections: thumbnails of recent pages at the top, bookmarks shown as a list of icons in the middle, and a combined URL bar/search bar at the bottom. If you run a search, the bookmarks section is overtaken by your search results.

Something iPad browsers typically lack is customization options for separate users. Junior will remedy this by allowing for individual user accounts. You just swipe left while surfing, and you’re presented with a login menu. Each user gets their own bookmarks and other settings, and these can be password-protected.

Safari for iPad is little more than a port of the Mac version, without much thought given to the needs of a touchscreen app. (Ironic, considering.) Junior looks to change all that, whenever we get our hands on it. There’s no word on that yet, since it’s still in development. Hopefully it’ll be sooner than latter — scuttlebutt suggests that Google is working on a version of Chrome for iPad as well.

Which one do you suppose will be released first?